The Anniversary Waltz race was set up by fell runners Wynn and Steve Cliff, to commemorate their wedding at Newlands Church in the Lake District. Now in its 21st year, this is becoming a classic medium-length fell race, taking in 12 miles and (more than) 3600ft of ascent in the Newlands Valley. The race route traces a heart in the mountains.

Starting on a narrow track and heading straight for a road, the race opens with some jostling for position and a steady grind up towards the trail head proper at the base of Robinson. The sun is out, and within the first couple of miles, vests are off and heads are beginning to singe. At this point, I was comfortably in the top 70 and steadily passing other competitors.

Climbing up towards High Snab ridge, it becomes clear just how much more challenging Lake District races are compared to those of the Peak. This climb just grows and grows. Beginning optimistically with a run-walk technique, I rapidly take to hands-on-knees climbing. As we near the ridge, the incline becomes so steep it’s practically vertical. The ultimate ascent to the summit involves some scrambling up marble-smooth rocks, and suddenly we’re up the first 2000 feet or so of ascent.

Having tracked the ascent on my Suunto, I’m still confident about the race, despite my calves feeling as though they’ve been through a shredder. The first descent takes us over a bouncy grassy fellside. It’s around this descent that I realise my legs are not really in the race at all. So much of preparatory mountain craft is about training for the specific race, and I had not done enough descending in training to adequately strengthen my quads for the brutally steep and unpredictable terrain of the downhills.

At Hindscarth I was losing places, and by the descent off Dale Head my muscular endurance had dissipated. So much so that during this descent I was almost as slow as my uphill paces. But to be fair, I’ve never come across a descent like it. Over half a mile we lose just shy of 1000 foot of ascent, and I’ve spent all that in a seated position that has my quads screaming and neuromuscular co-ordination decimated. Fragments of moraine tumble down the hill around our calves as they catch on shoes.

After kicking up a bit of mud around Dalehead Tarn, it’s a climb back up to High Spy, offering distracting vistas of the preceding mountain line. I try to increase my cadence and prevent the erosion of my race position on the more runnable descent off Maiden Moor, but it’s all I can do to stay in the race at all as I dejectedly climb Catbells, the final summit. Stair village and the assembled parked cars are clearly sighted as we jostle through the weekend crowds on the hilltop, but they seem an impossibly long way for me. As I descend, my legs feel hollow, banded by pain, and every step is a chore. Surely enough, the descent is so steep we’re nearly at the finish line within minutes. I must have been passed by 10 runners hungrier for their race position and the food and drink at the finish, but I wanted to keep my form and finish without looking as deflated as I felt and just steadily glide home to my family welcoming party.

I inhale a handful of cups of water and hobble to the feed station for some food, kindly provided free of charge for competitors. I decline my free beer. Yes, I felt that bad. I’m slightly disappointed to finish in 159th place in 2 hours, 17 minutes and 8 seconds. Out of 444 competitors, this isn’t bad, but my start position and first few miles would suggest I should have snuck under 2 hours if I was on form. Another part of my brain tells me that this is exactly what fell running is about: I’ve once again been touched by the pains and pleasures, the sublimity, of physical and mental immersion in the mountains. Anyway, as a ‘training race’, this is a wake-up call to toughen up my legs and work at my long game if I’m going to really target Borrowdale later in the year (if I make the entry list). A week later, I can still feel the race in my legs. It’s a bit like starting fell running all over again! 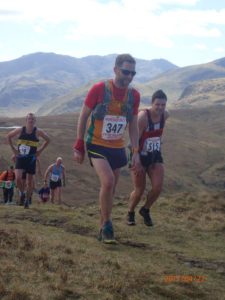