Last Sunday 970 people paid up to twenty eight quid each to run around Chatsworth Park on the Vitality Move 10k. Last Friday, a field of 153 (with virtually 10% from Steel City Striders) completed the Barlow Carnival 10k at a cost of £5.00 (£6.00 for entries on the night). So what if no-one is quite sure what the distance really was but then Chatsworth wasn’t accurate either and the Derbyshire scenery at Barlow is just as good, if not better some may say.

Forget the “Fun Run” tag, this was a competitive event with the winner, our very own Phil Skelton, coming home in 33.29. First lady was Fiona Kesteven of Totley AC in 38.39 whilst Strider’s Jennifer Rich confessed to be “disappointed” to come second in 39.48 despite the two bottles of wine received as her prize – a sign of growing confidence and ambition within the club. On the subject of prizes there were numerous spot prizes, drawn at random and returning value to those who don’t usually trouble the scorers but enter races nevertheless thus making them what they are. 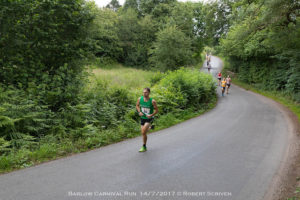 It’s still early in the race and Totley have already got a decent lead. Phil decides that he needs to steadily close the gap to prevent him getting away. Credit Robert Scriven.

The course itself is a mixture of road and trail and is definitely not flat. Phil, conscious that he sometimes goes off a bit too fast in races, made the decision to be a little more cautious this time as the penalties for going into oxygen debt too early can be severe. But that’s the eternal dilemma; let the leaders get away and the race is over almost as soon as it has started, especially in a shorter race. So, as Aiden Linskell from Totley put the boot in early, Phil had to think again and managed to close the gap over the first mile, eventually getting in front and luckily no-one came with him.