Everybody wants to run London don’t they? Crowded, noisy and almost impossible to get a racing line with the opportunity to be publicly humiliated on national t.v. if you have the misfortune. Even with a good for age qualifying time there have got to be better marathons about but Manchester with its nonsensical traffic issues, the fiasco of a short course in 2015 and the unacceptable queues for the baggage reclaim in 2016 is a never, ever, again.

Alternative Ulster: arrive Saturday, race on Monday and then a holiday with the Missus so that she can visit long lost and distant family.

What a vibrant place Belfast is with fascinating architecture (if you look up above shop front level) and genuinely friendly, welcoming people. And what a race too with a course approved by the Parades Commission that goes to the four cardinal points of the city taking in murals and nuns along the Falls Road then goes through the Peace Gate and past the Union Jacks of the Glasgow Rangers Supporters Club on the Shankhill Road; troubled places remembered from the television as a youth. The people of Belfast came out to watch in their thousands too with impromptu feed stations along the way and even offers to use the bathroom for those in need. They did their city proud and got the bonus of a local lass winning the women’s race for the first time since 1999.

With a separate fun run and six mile walk the race also included a relay event resulting in 15,000 people on the road. The relay competitors, running at a range of different paces, could have been a problem for the marathoners but with numbers front and back they were easily identified and therefore discounted. Organisers of other multiple event races please note.

And my race? What do you think of pacemakers? I find them a complete nuisance with a runners following like a plague of rats behind the Pied Piper and clogging the course. Knowing that I would always run a positive split over the distance, I needed to catch and get in front of the 3:15 pacer so when he went through the first mile in 7:01 I was not too pleased. Something else unexpected was a Spring heatwave with glorious sunshine sending temperatures up to 18 degrees. There was prior knowledge of hills but the long climb up from 7 to 14 miles was demanding with all the height gained lost in a short sharp descent whilst the mile drag up to 24 miles was spiteful. Basically though, I went off too fast for although 20 miles was reached in 2:28, the way people kept going past during the last few miles was unforgivable; I don’t even remember the 3:15 pacer going past

Positives: A large field (2148 marathon finishers) but nowhere as claustrophobic as London. Excellent organisation and support with numerous feed stations and one with gels at 15 miles. Enough quality at the front end to test anyone in our club. City centre start so that Margaret can shop while I race and multiple viewing opportunities for those who do want to watch the race. A medal and a t-shirt if that’s your thing. Spring Marathon on a similar trajectory with my training group’s racing objectives. Belfast is quick and easy to get to from East Midlands Airport.

Negatives: Hilly and not a pb course even if the ladies winner did manage one only a week after running London. Start and finish in different places although there are free transfer buses; there is talk of a new route finishing at Stormont next year. The bloke having a pee in a plastic bottle whilst in the starting pen was a downer too.

Personally, I have unfinished business here and will treat the first half with more respect. Hopefully we will get some Irish weather next time. 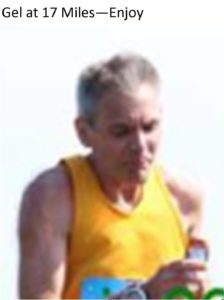 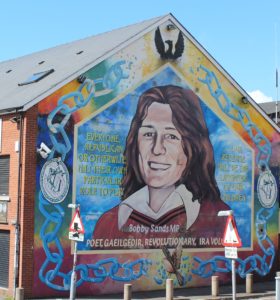