Well, it’s a marathon, half marathon and other races which take place in the evidently delightful Spanish city of Bilbao.  Quick bit of geography: it’s on the Northern coast of Spain between San Sebastian and Santander (yes, there really is one).

It looks like 590 runners took part in the Marathon, with Eliud Kibet Too winning in 2:18:26 – apparently some 10 minutes ahead of David Kiplagat.  The delightfully named Cheburet Mercy Jepkangor was the first woman (and 4th overall) home in 2:47:07.  Clubs, etc are not credited in the results. 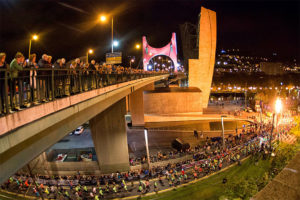