I’d always told myself I could never run a marathon.  Back in 2002, shortly after completing the Great North Run, I imagined the extra work I’d need to put into training and couldn’t envisage how I’d ever cope.  Not for me.  Fast-forward 13 years and, after 18 months of actually enjoying running, I’d completed the 2015 Sheffield Half (the windy one) in 1:46.  “I still couldn’t run a marathon.”  Two months later, the Three Lakes Classic.  15 miles, just over two hours.  The furthest I’d ever run.  A small seed was sown in my mind.  Could I do 16 miles?  18?  Turns out I could.  October 2015 and I’d signed up to the 2016 Manchester Marathon (the one with the baggage issues.)  3:59:00 later, after having being dragged through the last 10k by my pacing partner James Fletcher, I’d done it, a full minute under my four-hour target.  In the year I’d turned 40 I’d managed something I never thought possible.  That was that then.  Ticked off.  Never to be done again.

I can’t pinpoint a time where I decided to do another but I do recall that if I were to do another that I liked the idea of one in the autumn.  Since Manchester I’d made a transition to mostly trail and a bit of fell running and I imagined how easy it would be to get the miles in through the summer, two hour evening sessions around Rotherham while the kids are in the pool.  If I do one, it will be York, I thought to myself.  Beautiful, historic city, lots of sights to keep the mind occupied etc etc and, logistically, fairly easy.

Then, on a business trip to The Basque Country, a friend and colleague told me about the Bilbao Night Marathon.  “There’s a 10k and a half too.  Why don’t you come here, you can stay with us, we’ll do the 10k and you can do the marathon?”  What a daft idea I thought.  I mean, it sounds great an’ all but it won’t happen and, besides, I’m not sure I want to do another anyway.  Plus it would be far easier to do York.  Yep, if I do another, it will probably be York.

Bilbao it is then.  Slightly nervous and still unsure if I wanted to do it, I registered.  €42.  One Euro per km.  Not bad.  Book flights.  Find and stick to a training plan to do it justice.  Spend the next five months worrying about the 2030hrs start time, how I would feel if I slept badly the night before and what my meal plan would be on the day.  Get an attack of gout five weeks prior, robbing me of one of my long runs.  Recover and take two minutes off my half pb in Nottingham.

Four weeks later I was on my way.  I had Friday afternoon to myself in the city, where somehow I managed to walk nearly the distance of a half marathon without knowing it, in 23 degree heat.  Not ideal prep but the three course Italian lunch kept my energy levels up.  I met my mate Aitor, who was putting me up at his house for the weekend, and we headed back to his where the 0230hrs start that morning started to take its toll.  I retired at 2230 and didn’t surface properly until 0900 the following morning.  Perfect.  After a day pottering around in his home coastal village of Bermeo, chatting to his family, playing games with the kids and eating my own body weight in chicken and chorizo paella, we headed into town and joined 11,000 other runners in the starting blocks just before 2000hrs.

The race starts outside the newly re-developed San Mames football stadium, home to Athletic Bilbao.  As the sun set and the pre-race rock concert drew to a close, the nerves turned to excitement and with several bursts of fire from the flame-throwers above the start line and fireworks ringing overhead, we were off.  Quite a spectacle.  Suddenly I was overcome with the sense that I couldn’t quite believe where I was.  Four years ago I couldn’t run much more than a mile and now here I was, running my second marathon in 18 months, overseas and at night.

The city itself in the early part of the race was resplendent.  We headed down the Gran Via, full of families taking time from their Saturday nights to cheer us on, to Plaza Federico Moyua, a square in the middle of a roundabout with a hotel at which I’d stayed many times.  From here we crossed the river and headed out into the suburbs.  In truth this section was a bit of a trudge, long straight roads amidst tall apartment blocks and cars parked on the roadside and my mind turned turned to the fact that, as a two-lap marathon route, I would have to do this again in 13 miles time.  Never mind.  Heading back towards the river at around 6k I passed Aitor, whose calf niggle had become an injury, and he was walking back to the 10k finish.  “You OK, Aitor?”  “Fine, Simon.  Good luck…”  The 10k runners soon peeled off, leaving a good number of half-marathon runners and, after a lap of the Dona Casilda de Iturrzar Park, we re-joined them by the magnificent Guggenheim museum before heading under the road to continue the rest of the first lap.

We headed over the river again and skirted the edge of the old town, the streets still packed with well-wishers and what BBC news might call “revellers”, out for a drink and a meal in the warm evening.  We then took a 180 degree turn and headed past the church and the town hall, back under the road and along the promenade by the university.  “Sheffield?”  “Yes mate, where are you from?”  “Penistone.”  “I’m Simon.”  “Jeremy.  Good luck.”   Small lump in throat.

Taking another 180 degree turn we headed back whence we came, over the river, and on to the half-marathon finish line.  This, mentally, was one of the toughest parts of the race.  Marathon runners funnel by half-marathon finishers to their finish line where the bright lights, extremely loud music (I’m in my 42nd year, as we’ve already established) and PA gave encouragement to those finishing the 21km lap.  Us marathoners had to watch as we took our path alongside the finish line and then around and behind it.  Leaving behind the noise and the lights for a secluded riverside, the path ahead seemed quite dark.  Runners became very strung and for the next 300 yards to our left, half-mara runners were being re-united with friends and family, collecting their bags and congratulations.  My mind started again to think about the long straight stretches along the less-inspiring bits of the route.  I suddenly felt quite lonely.

From here we started our second lap.  By now the roads were emptying of spectators and my suspicions about miles 15-19, through the ‘burbs, were realised.  A real slog.  Most frustratingly, the energy gels and chews, promised at the feed stations from 25kms, had not materialised and so I had to make do with portions of banana, a few squeezes of orange and shot-sized measures of Powerade.  I was starting to slow down.  Back over the river we went and a shout of “come on Simon!” lifted my spirits.  It was Aitor, who was waiting for me.  Back around the park and past the Guggenheim.  Under the road.  “Hey, it’s a Strider!  Go Strider!!” (or words to that effect.)  A proper highlight.  Big lump in throat.  It was Lore Lambien, in the city with friends.  Amazing.  My pace improved for couple of miles after that.

23 miles came, and with it the wall.  I was fighting cramp in my feet.  I threw in an 11-minute mile, a couple of minutes slower than I was averaging to that point.  The long, promenade section still to come, I knew this was going to be a really hard.  At this point I told myself I wouldn’t be doing another marathon.  “Come on Strider!”  There they were again!  Finally, the last river crossing.  Twang – a terrible burst of cramp.  I had to stop briefly and stretch.  “Oh, come on!” I remember shouting at myself in the street, struggling to get going again.  A guy passed me and offered me some cream but when I realised I couldn’t eat it (it was pain-relief, not carbs) I decided to carry on, with it in my hand, down the slope from the bridge and past another handful of bars.  Another shout of “Come on Simon!” from Lore and her friends welcomed me into the final straight.  Another highlight.  I think there is photographic evidence of me actually managing a smile at this point.

Under the road behind the Guggenheim we went and then finally, a 90 degree turn into the finishing straight.  4:04:40 since I’d started and at approx 0040hrs I crossed the line, slightly delirious, to collect my bag, drink and food (not that I could eat anything.)  I wandered aimlessly for a while, looking at others taking massages and then Aitor arrived to walk slowly with me back to the car.  I creaked in, we drove the 30 minutes back to his house to a beer, some chicken escalopes his wife had prepared for lunch (I ate all five, they were amongst the nicest thing’s I’d ever tasted) and bed.  Not that I could sleep, obviously.  My mind was buzzing with the sights of the city at night, the experience, the pain and what I’d achieved.  Not quite the time I wanted (3:50:00 ideally) but never mind.  My watch had the course as 26.8 miles and my unofficial marathon time, over 26.2, clocked in at 3:58, so a good consolation.

“When are you doing your next one?” asked Aitor over breakfast on Sunday.  “I don’t think I am.” 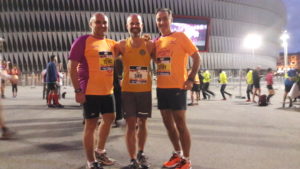 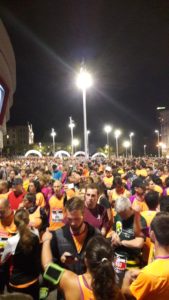