A simply astonishing report from the Piccolo Dolomiti by our overseas correspondent, Valeria Gasparini. No more introductions, read on…

Even though it’s 2km short of the real distance this race still earns the magic name.

Organised by Ultrabericus Team and only at its 6th edition this is the “short” option of the event: the real challenge is the 83km Ultratrail with 5500m positive elevation. The real heroes started their journey at midnight between Friday and Saturday and venture through the mountains and 52 tunnels which were excavated during WW I.

We joined them halfway through their route at Pian delle Fugazze, in the heart of the Vicentine Alps, at 9am on Saturday morning.

For safety reasons we were to carry some compulsory equipment for the whole race including warm clothes and at least a litre of water, which means everyone was running with a rucksack.

The meeting point was in Valdagno (where the finish area was located) where we picked up our bib numbers, left our bags and boarded a shuttle bus that took us to the starting point. There was a little hut by the start that offered us shelter (and toilets) as we arrived.

The weather was nice, very warm but slightly cloudy which made it a bit easier to start with.

Only in the first 3km we gained about 500m – it was a brutal start and the cold-ish muscles definitely felt that, especially my calves. We reached the first “water” station (there was beer too!!) at 6.5km from where you could see the highest point we had to reach: Peak Carega 2238m. It looked so far and high from where we were it hurt! Again we gained about 750m in about 5km. While we were just in our first 11km we kept meeting and overtaking the heroes from the ultra, who had been awake and running already for about 12 hours. It should have made us feel quite powerful and strong but instead it made me feel humble and kept admiring their determination and resilience. I enjoyed chatting to them as we passed along, asking how they felt and how their night went, encouraging them to keep going and be strong.

When we reached peak Carega I knew the worst had past and it was only about 2km (downhill) to the first feed station and it was full of delights: speck (Wikipedia suggests that it can be described as “dry cured, lightly smoked ham” although it’s much more than that, and if you haven’t tried it yet I recommend you do asap), fresh tomatoes, almonds, tarts, biscuits, chocolate, soup, tea, coffee, water, coke, beer, you name it. We stopped to enjoy the feast and took a couple of photos. 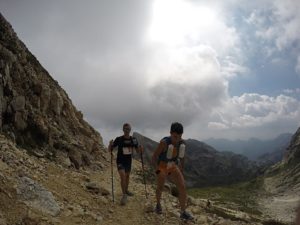 Rifugio Fraccaroli at over 2000m. Despite the awsome views concentation is essential to avoid a life threatening tumble.

From now on the race was almost all downhill with the occasional elevation gain. The first 16km weren’t that bad, gradual and joyful sweet downhill and then suddenly we dropped almost 1300m in 10km. It was awesome! Legs felt strong despite the miles on them and happy to let themselves go freely. Although the heat increased as we were losing elevation and being about 2:30pm it was about 30 degrees 80% humidity, I felt pretty good.

It was almost time to stop running – I recognised the road behind the finish line and had a flying finishing stretch stopping the watch at 5h 58’ 43”, 8th lady and 60th overall (bear in mind it’s a small race, only 41 women and 191 athletes completed the route).

The organisation, support, feed stations, pre and post-race stations, food, encouragement, location and route were absolutely perfect! I couldn’t have asked for a better race and would definitely recommend it – and maybe try the ultra at some point in the future? 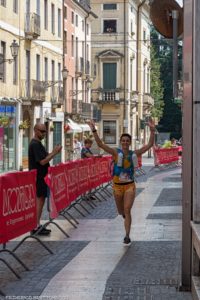 Val as she runs through the line still with the energy to smile. Crepi.

You can find full results here