This was the eighth edition of the Brinsworth 10k, this year raising money for Weston Park Cancer Charity on behalf of Kimberworth Strider, Emily Lunn who is currently receiving treatment there. We wish her well. This is a friendly little event (145 finishers) and it was clear that for some, running six miles was a significant achievement.

The race starts with a 1km lap of Brinsworth Comp’s playing fields before heading out towards the Europa Link and Catcliffe before returning to finish with another, less than welcome, lap of the field. Not a flat course, with a few twists and turns although the Europa Link, well used by some Striders for their long reps in the winter, presents the chance to stretch the legs.

First Strider home was Adam Best (37:22) who, in his post race interview, confessed that he thought he was being used by the leading pack as a windbreak over the first mile or so. First to cross the line was Arron Larkin (Kimberworth) in 36:24 whilst first lady was Jo Bolton (Kimberworth) in 42:29. 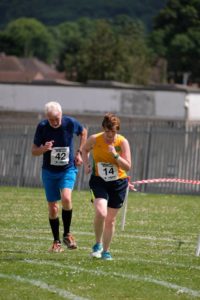 Louise powers on towards the finish line.

The post race banter included chat with a face recognised from a recent race with it becoming evident that he’s not a member of a running club. Drawing in some Kimberworth vests, the benefits of joining a club were made clear: club sessions twice a week, speedwork on the lower tier of Tinsley Viaduct, three club races a year, the rain, mud and hills of cross country in the winter but most of all a yellow and black vest and a great bunch of mates. Sold. And before anyone starts, he’s from Kimberworth so that’s the right club for him. 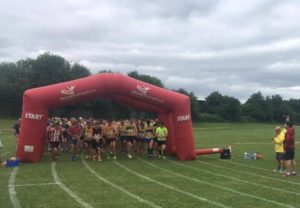 Results are attached but don’t have details of clubs so if you didn’t wear your club vest, you haven’t been included in the race report.