As in 2013, this year’s Fell Relays were hosted by Eryri Harriers and took place in Llanberis, more specifically over the flanks of Moel Eilio, Feel Goon & Moel Cynghorion.

One hundred and eighty one teams from every fell racing club of note in the UK competed, including the elite of British fell running, with all but six teams completing the four legs.

Not for the first time, fastest of the lot was Dark Peak’s “Fairbrook” team with an overall time of 04:10:21. The Female open race was won by Ribble Valley Harriers in 05:01:02.

Two teams of striders took part, the “Vulcans” and the “Cutlers”.

Leg one was a solo run of 8.9 Km / 707m ascent. Despite his slowest ever race (which gives some idea of the terrain involved), James put in a fine performance achieving the best position of the day in 58th spot, whilst Tom left the Cutlers more scope to move up the rankings, despite some courageous bum sliding.

Leg two was a pairs run over 14.9 Km/ 909m ascent. Alasdair and Dan put in another strong performance for the Vulcans and made it back in time to handover to the leg 3 runners. John & Mick improved the Cutler’s position although leg 3 had already commenced in the 130pm mass start before they came in.

Leg 3 was the “nav” leg, and as is usually the case, was the toughest of the lot, involving some 3000 feet of ascent including a near vertical kilometer.  Rob & Joe took it on for the Vulcans whilst seasoned campaigners, Andy & Ian again moved the Cutlers up the rankings. Importantly, our chairman remained unscathed for his upcoming trip to Nepal.

Both leg 4 runners (myself and Phil) ended up in the 3pm mass start (despite me standing in the holding pen for some 40 mins prior to this just in case Rob & Joe appeared earlier – Phil needed several attempts to enter the holding pen, having been turned away first for having no kit and then for having no compass). Whilst leg four was the gentlest of the four (8.35Km, 512m of ascent) it was still challenging enough and the final descent was especially boggy having been churned up all day (being used by all four legs). This descent featured some rocky terraces requiring leaps of faith into boggy ground below. Phil improved the Cutler’s position yet again, and more importantly, I beat Phil. Phil then almost failed to get any dinner as Dan had disappeared with his meal voucher.

Overall, a fine time was had by all in a very well organised event, and I for one am keen to repeat the experience next year. Would be nice to get more striders involved next year, including some of our fine female fell runners? 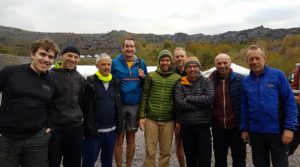 most of the motley crew, photo – Rob Davies