Last weekend I went to Belgium to visit my sister and niece and to make sure I would not skip my training we picked a race where we could both race as it included a few distances: marathon, half marathon, 11.7km and marathon relay. I picked the half and my sister ran the 11.7km (with a 14 months old she doesn’t get much training done lately).

It was held in the friendly little town of Buggenhout (North West of Brussels) and if you speak a bit of Flemish (unlike me) then you probably worked out that most of the route went through the woods.

Half marathon runners and above received a t-shirt (another one that fits!) upon collection of bib number and the 11.7km runners got a bandana (not a great one though I’m afraid).

The atmosphere was sparkling, it was a glorious late September sunny day (at least after the fog dissipated), warm but still fresh. The day got opened by the kids run at 9:30. Runners for the 11.7km set off at 10am and all the rest went off together at 10:30.

The route of the half was lovely (however might have been a bit boring for the marathon as it was two laps of that), it was not entirely flat but can’t really say it was hilly to you lot. Let’s call it undulating, those kind of slight slopes that you can’t identify with sight but you can feel in your legs. It was well marked and marshalled.

I had a good race, even though my calf and leg played up a bit between km 14 and 17 (if you haven’t heard me complaining about it yet, this is an ongoing issue I’ve been having recently), I really enjoyed it and the support was good too considering there are less than fifteen thousand people living there.

As I approached the finish, I spotted my sister all agitated running towards me and yelling “you are the first lady!! Come on, run, run, run, keep pushing!!!” Almost in disbelief all I could reply was “I can’t go any faster than this”. (We’re they yelling at each other in Italian? ed.)

To be fair I did hear some supporters telling me something like “Eerste Dame” and from the little German (which is very similar to Flemish) I remember from High School, I thought it meant “first lady” but I could not believe that 1h 35’ 49” would have earned me that position so I assumed they miscounted.

Anyway my sisters words gave the last boost to stop the watch before it hit 36’ with a short but intense sprint finish. 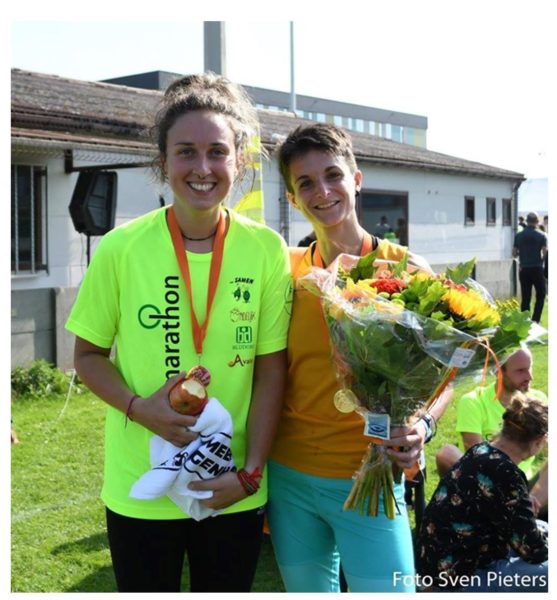 Podium finish continental style with a beautiful bunch of flowers.

More amazed than me were the organisers who felt honoured that I had travelled all that way “just” to run the Bos(half)marathon. The podium was indeed very international: turned out the third lady was a British runner originally from Leeds but now living in Belgium and that was her first half marathon. 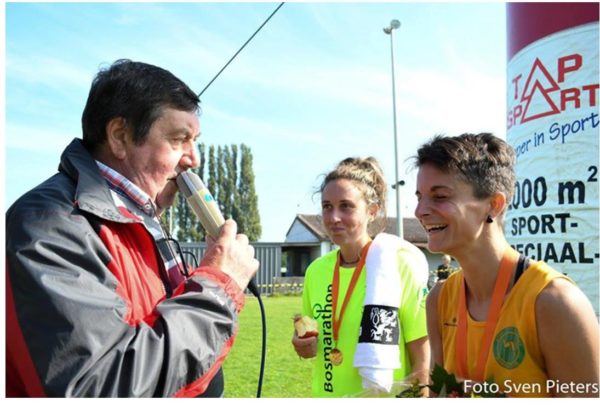 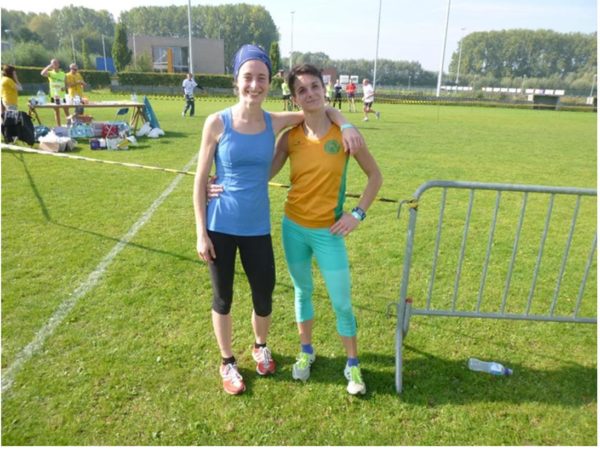 Val’s sister ran an amazing 1h 6’ for 11.7km and placed 13th lady and 2nd in her category which is amazing considering she doesn’t get the chance to train.

Useless to mention I was the only Strider there. (Perhaps not next year – Racing and Belgian Beer are both very tempting ed).

Full results for the half are here http://www.bosmarathon.be/images/BM2017UitslagHMAR.pdf