Jessica Ennis-Hill’s bandwagon rolled into Chatsworth with what was billed as a Running Festival with not one, but two 10k races, a 5k and the Music Mile. Other events included Netball, Hockey, Go Ape Segways plus Daley Thompson’s Athletics Academy. Entry was £28 plus £5 for parking whilst T-shirts are extra too (ouch) although some Striders had Parkrun discount codes which got them free places. Children were free.

The course itself was a one lap tour of Chatsworth, all off road (grass and hard paths) and inevitably involved some climbing so not easy. The 10k races were intended to go off in different ‘waves’ although one Strider commented that she “wasn’t sure what happened with the waves. I thought it was a mass start and went off with what I later found was the first wave of four. It wasn’t explained well.” Other Striders had similar problems although with the music there were smiles all around and everybody seemed to enjoy themslves including the children who got a medal for their Music Mile. It is suspected though that some would have found the razzamataz unbearable. 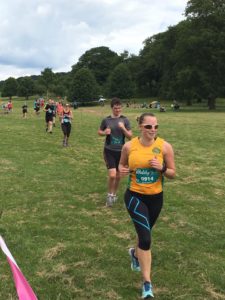 The way the results are presented on the website says a lot too: no club details whilst the two races, actually two hours apart, are all muddled up with each other. This is nonsense, for example Matt Rimmer appears as fifth overall but was actually second in the 11:00 race. An attempt has been made to sort the results between the two races. Please message me if you’re missing as without club details in the results my chances of getting everyone are minimal. There were a total of 970 finishers in the two 10k races nineteen of which were Striders at the last count. Some Striders reported issues with the chip timing. 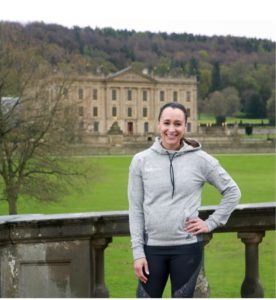 Jess, on hand for chat and selfies