Chirk Castle was built in 1295 by Roger Mortimer de Chirk, as part of King Edward I’s fortifications guarding the north of Wales. It once protected the entrance to the picturesque Ceiriog Valley, near Wrexham, and is now a Grade 1 listed castle owned by the National Trust. It is also the site of a free monthly 10km trail run as part of the National Trust’s nationwide running events.

I happened to be in the area, as I was visiting family near Oswestry, and thought I would give this local 10k race a try. A bit out of training, I made myself promise (to myself) that I would not race it. After a painless and friendly registration process, I towed the line with around 80 other participants, just below the impressively stout castle and within the green pastures of the grounds. Apart from knowing that the first part of the race goes once around the castle before heading into woodland, I knew very little about the route. Just as well, then, that some fast runners were out to guide the way.

After our circuit of Chirk, rising steeply to do so, we were soon into woodland through twisting tracks, then tracing a long circuit by way of some open fields. This cross-country section tapped my dwindling energy, after the rolling hills of the course preceding (each lap has around 400ft of ascent), and I checked my watch to see that we were nearly at the half-way point. With some lactate tingling in the legs and third place long gone, I decided that I would ease up and prevent myself from getting any deeper in to the race, and was content to finish one lap (just over 5km) of the two lap course, in fifth place. As with many of my recent races this summer, I had little more to give after a promising opening few miles. A little cautionary aside: it’s easy to get overtrained (https://philmaffetone.com/the-overtraining-syndrome/). Back to base training for me!

The winner was Paul Hawkins, a Stockport-based professional triathlete, former Royal Marines Commando, and founder of peaks-performance.com, who did the 10k in 39:11, which looks like a course record (in the middle of a 12 mile training run!).

If you’re in the area, head on down on the fourth Sunday of every month. 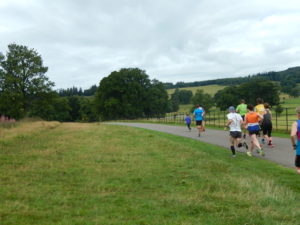