8 miles with 1699 feet of ascent!. Not sure what the most difficult part of this race was. Was it tracking down the results, was it negotiating the belligerent tarmac gang that had closed the whole of the Woodhead Pass or was it the thigh deep bogs. The route can be split into three distinct parts up up and more up, bog bog and more bog, then down down and more down. If this had not been part of the SCS fell race championship then I probably not have gone and that would have been a bad thing as this race has got to be one if the best in the local calendar. May be not for the faint hearted as the ascent is strength sapping. the top of the moor has no path so you follow the flags but choose your own route and only have yourself to blame when you end up thigh deep in a peat bog, then comes a long technical decent. What’s not too like as there are cheap bacon butties to consume when you arrive back at the camp site .

There was a six fold increase in Striders participation from last year let’s hope for another big increase next year as it is a true fell race that should be experienced by all. As the results aren’t properly in yet, we’ve not idea how many runners there were or who won but we do know: 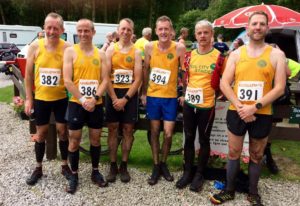