Tony Bell reports that on Sunday 20th August he returned to his home town of Warrington to compete in the Birchwood 10k, organised by his old club Spectrum Striders. Ranked in the top 100 races in the country, it is fast and flat with t-shirt and medal and over £2000 in prizes (including team prizes) for those whose parents have blessed them with decent genes. Tony finished in 248th place out of 969 finishers in 47:26, his fastest 10k for three years so his occasional Wednesday night runs with the club must be doing him good. He has also been seen of the track on Thursday in the past. 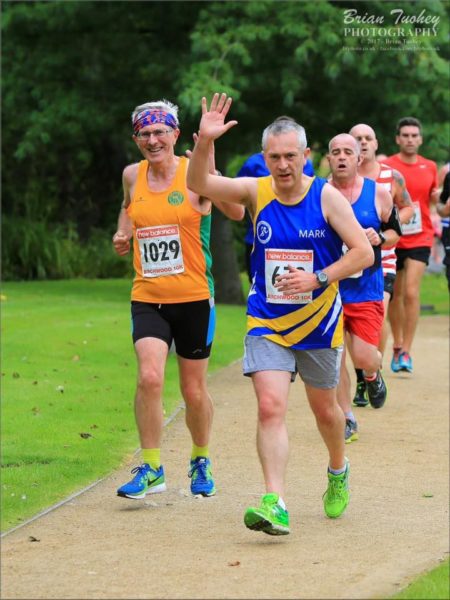 Tony being paced by brother Mark from Warrington Running Club. Tony did the decent thing and made sure that he beat him by nearly a minute.

What many may not know however is that since work brought him back to Sheffield in 2015 (University of Sheffield 1981-1984) Tony now trains with City of Sheffield AC racewalking group with coaches Brian Adams (1976 Olympics and 1978 Commonwealth Games) and Helen Elleker (1990 Commonwealth Games and 1991 World Championships). Whilst walking he competes for Lancashire Walking Club and a perusal of Power of Ten will see him regularly picking up gongs over a variety of distances.

First woman on Sunday was Kirsty Longley (Liverpool Pembroke) who ran 36:45 whilst Jack Martin (Stockport) led the men home in 31:37.