Advertised as fast and flat, this race does what it says on the tin so there were no real excuses for below par performances although the warm and breezy conditions added to the challenge. The race starts and finishes at Derby County’s Pride Park stadium and takes in a tour of the city centre before heading towards more rural parts, including Elvaston Castle Country Park, returning along the River Derwent. The Country Park and river sections are on hard packed trail rather than tarmac.

This race was as expensive most other big city races but there was ample parking whilst well organized starting pens, dictated by the letter on the race number, alleviated some of the problems of getting a large field on the move. Chip timing is de rigeur at races these days. A downer were the postage stamp sized mile markers, really poor for a race of this stature.

My own race was overshadowed by Barry Gyte who, as usual, went past me at three miles proving yet again that a conservative approach usually pays off in long distance races.

A dozen Striders made the 30 mile trip to Derby, first home being Alex Shepherd who managed a pb despite an emerging foot injury. Barry was second M60. Our first Lady home was Rebecca Shutt in1:40:26. We saw Dave Birch before the race but can’t find him in the results … ooh err.

For the record, winner was Toby Spencer, Coventry Godiva, in 1:07:54 clinching victory from Stuart Spencer, Notts AC by just one second. A look at their respective Power of Ten profiles shows how Toby Spencer’s more extensive track background may have proved decisive. First lady was Becky Rigby, Preston, in 1:16:49. The 2780th and last person crossed the line in 3:21:35. 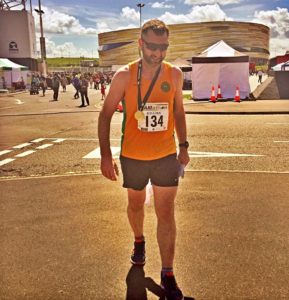 Alex Shepherd sporting a fine medal whilst nursing his injuries

Barry Gyte looking fresh as he speeds through the last 0.1 mile