So the story began late last summer when I bought my first ever road bike to try and keep my niggling calf and achilles problems at bay.  All didn’t quite go to plan as I fell off the bike on the tram tracks within weeks.  Oops!

A short time later, a conversation with David Maloney planted the seed in both our minds about doing a Duathlon in 2017.  We had a choice between the more formal Sprint distance or choosing this more unique offering around Derwent.

Sprint Duathlon are very much road only and usually comprise of a very standard and regimented 5km run, 20km bike and 2.5km run.  So that’s 3.1 miles, 12.4 miles and 1.5 miles in old money.

The Derwent Duathlon is very much off the cuff with the following make-up; 2.8 mile fell run, 18 mile bike ride and 3.8 mile trail run, so already the stakes are raised against a conventional Sprint.

The toughness of the fell element of this race is heightened that it includes the first mile up and the last mile down of our very own Salt Cellar race.  Those that have run that will know how steep and challenging that is.  The bike and trail aren’t flat either, i’d say more undulating.  A tough morning was in store.

On arrival David and I were delighted to find Liam Russell had also entered, making it three Striders involved.

Another unique element of the race is that you could run the leg of your choice first and then complete the other after the bike leg.  Liam and I went for fell first, trail second.  Whilst David opted for trail then fell. Not sure any of us knew which was the best choice?

The competitive nature of the event is turned up a notch as each year the race is chosen to be the UK Police Sport Duathlon championship race.  I’m not quite sure how much the coppers are paid these days, but there were some seriously nice (and expensive) bikes sitting in transition.:)

Note: all timings listed are somewhat approximate due to timings through transition etc not formally recorded.

First lady home was Elsbeth Grant in 1:40:44.  Again, a super quick time, especially considering she was under 20 years of age.

There were 103 finishers in total.  So without further ado, here are the Striders results.

Now it doesn’t take a brain box to see that biking is not quite my forte at this moment.  I managed to overtake people on both the fell and trail runs, but I was overwhelmed by the amount of folks coming past me on the bike.  I found the bike very tough going.

David on the other hand used his years of biking experience to post a really good time having also ran really well.  If they handed out trophies for looks and get up, then Liam would have won hands done with his uber professional looking Tri Suit. 🙂

All in all, a very interesting morning, but very hard work.  I can still hardly walk two days later.  I’d be interested to see where we all would finish on a flat, standard and sprint Duathlon next time. 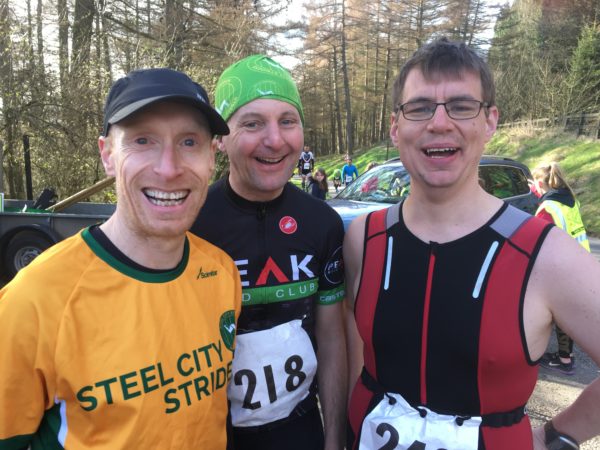