After a summer plagued by injury I needed a November race to target for my comeback; the half marathon at Clowne was too big an ask and my knees would not thank me for the gentle undulations of Barnsley, so when an advert for a new 10k race in Doncaster popped up on my Facebook feed I thought I’d give it a try.

This year was to be the inaugural Doncaster 10k. The racecourse-themed race was organised by local outfit Curly’s Athletes with their ‘athletes before profit’ philosophy, and the pre-race information promised a whole load of event for the £15 entry fee, and they didn’t disappoint.

I’m glad I booked when I did, as with 6 weeks to go to the event, the organisers announced a sell out; such was the lure of chip timing, a decent looking medal, a free pork pie to every finisher and a triumphant finish in front of the famous Doncaster racecourse grandstand. The pre-race information was very well presented, with regular emails for both beginners and seasoned runners alike, giving advice on training and race preparation from event partners Blizard Physiotherapy, combined with race-day information (such as road closures and parking arrangements) as well as a bit of humour.

The day of the race was bitterly cold, but no huddling together for warmth in a boggy field-cum car park, the car parking was second-to-none, as you would expect from a national sporting venue. After parking up, it was only a short hop over the road to the grandstand, where hot drinks and breakfast  for spectators and enough toilets to adequately service the 2000-strong field were available – I don’t think I’ve ever been to a race where I haven’t had to queue for the toilet before! For those who didn’t take up the offer to pick up their race pack the day before, the registration process was quick and painless.

Onto the race itself, the route had it all. Exclusively on closed roads, the route took participants from outside the racecourse into Doncaster centre for a lap of the town, returning back via the racecourse to complete the second half up the A18 – this stretch allowed the field to see just how far the front runners were in the lead, and allowed friendly encouragement to fellow club members. Climbing the only (ever so slight) hill on the course, the final 2k were down hill (albeit with the wind in your face) back to the racecourse for that grandstand finish. As the race started, returned and eventually finished at the racecourse then this proved an excellent location for spectators to cheer on the field – the town centre part also provided an interesting crowd, raising cheers from coffee-drinkers on bistro tables outside coffee shops and homeless people rudely awoken in doorways alike.

So, plenty of positives for this race which will no doubt be an ongoing success, the only negative would be the date chosen, clashing with other well established road races in the region – let’s hope that this can be rectified for next year, so long as they steer clear of the first weekend in December!

The fast, flat race was won by Daniel Kestrel of Team Blizard in a time of 32:19.9. First lady over the line was Jenny Blizard (also of Team Blizard) in a time of 36:08.4. Five Striders took to the course and first home was Mark Gray, in 15th place, with a time of 36:11.2. I saw a few more Strider vests on the day too, so if anyone else wants their name adding to the list below then let me know!

Full results can be found here. You may ask why I’ve included the fractions of a second in the timings – well my 42:41.9 constitutes a 0.1 second PB! 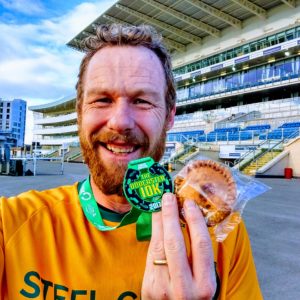 A medal AND a pork pie! What’s not to like?