The Don Morrison Memorial Edale Skyline race has been held since 1974. It is a race which is described as long and tough, with often challenging conditions. The 2017 running of the event featured a number of route changes to keep entrants on their toes, but luckily fine weather meant that conditions did not hamper their efforts.

Of the 13 Striders who entered the race, only 6 made it to the start line and only 5 finished the race. First over the line was Simon Bayliss, taking 66th place in a time of 3:48:37, and first lady Strider was Amy Duck in 147th place and a time of 4:13:24. Special mention to Thomas McCart, who was forced to retire from the race on Mam Nick, having already investing almost three hours of effort. 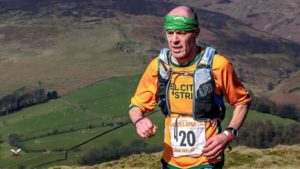