Simon Bennett continued his tour of Cornwall with a Friday evening outing to the dispersed settlement of Trethewey on the Penwith Peninsular for the St Levan 10k staged by Mounts Bay Harriers.  Near Land’s End at the end of England the route, run on country lanes, hardly has a flat bit whilst the conditions were hardly summery although perhaps not particularly unusual for this part of the world. 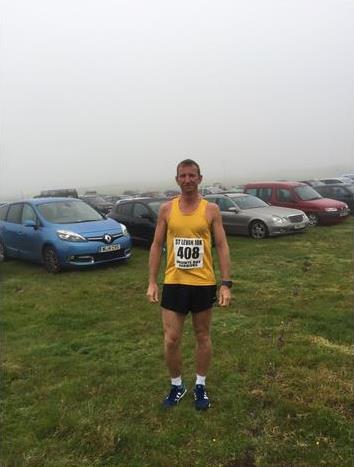 Simon’s 38:39 put him in 28th place (4th M45) behind race leader behind Tony Brewer’s 33:33 (Mile High) and first woman Emma Stepto’s 36:51 (Cornwall) who, incidentally, also won at Indian Queens last Sunday. A turn-out of 376 finishers was a good showing for an unpleasant Friday night in a thinly populated part of the country even if both races are part of the Cornwall Running Grand Prix.

So, on holiday and what to do with the family while you’re off racing?  This is the land of Rebecca with bleak heathery moors, Neolithic hut circles, abandoned tin mines and rugged cliffs. Nearby St Levan Church is a place of deep meaning with an obscure, split erratic rock of pagan significance together with two medieval crosses whilst nearby at Rospletha there is a further medieval wayside cross to be discovered. There are two more wayside crosses in the parish at Sawah and Trebehor. 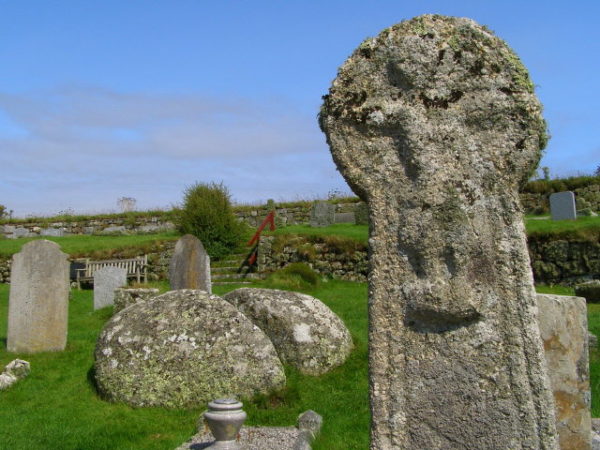 St Levan Churchyard with the saint’s stone which it said that he split in two with his staff. There is another cross situated in the churchyard wall.

This is the link to the monument at Rospletha, your portal into a world of discovery. Historic England

and these are the full results St Levan 10k Results