Last and most arduous (16-17 miles depending on route choice(s) with nigh on 4000 feet of elevation) of the Totley fell race series this race covers vast swathes of the Peaks and certainly lives up to its name.

Eight striders joined the fun including myself. Conditions were good; dry underfoot, not too hot, barely any wind, full visibility… After struggling to keep up with Nick whilst he taught me the route three days before the race, my plan was to keep him in sight for as long as I could. The start of the race is a hard slog up to the Totley moor trig point (check point 1) and I was a good hundred yards behind Nick and Alex by the time we reached it. After leaving the trig point the runner immediately in front of me suddenly turned R and set off alone at a tangent away from the path. I took a gamble that he knew what he was doing and followed him. His route effectively cut quite a large corner and when I rejoined the main path I came out just in front of Nick and Alex. The three of us were then pretty much together for most of the race. I was generally a bit quicker on the downhills but not so good on the uphills so we always seemed to end up back together and kept each over going at a respectable pace. We were all surprised to pass Paul Stuart around the half way point but he assured us that there was nothing wrong other than him being tired. (I doubt I’ll ever get to pass him in a race again!) Nick, Alex and I all reached the final check point (Totley moor trig again) together and Michael Timm was in sight too. I finally managed to shake off Nick and Alex on the descent back to the Cricket Inn but could not catch Michael.

Meanwhile, Louis had finished about half an hour earlier with an impressive eleventh place despite blisters hampering him on the last descent.  Well done also to Alison and Jill who were both 3rd in their respective categories (W40 and W50).

Thanks to Totley AC for a superb race which is incredibly good value – £6 for a long, well organised, well marshalled race with a huge buffet and free tea and coffee at the end. Puts many a 10K road race to shame… 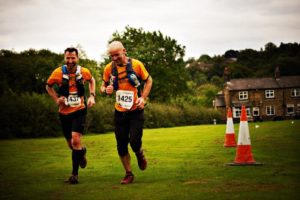