Well done to Strider Will Roberts who finished the Ice Ultra on 6th place and was the first Brit across the line – reading this it sounds utter madness but amazing at the same time!

The Ice Ultra is a 230km race over 5 stages taking part inside the arctic circle in Swedish Lapland and I undertook it to raise money for the MS Society.  I’ve managed to get together nearly £4000 so far which is amazing!

You wouldn’t have thought it looking at the endless white view all around Base Camp but this region had seen it’s lowest levels of snowfall for as long as anybody can remember.  On one hand it means that conditions overall may be better for snowshoes as there are less soft, heavy drifts out there.  On the other hand it means that some of the ice lakes, usually covered with snow too, are left slippery and exposed.

On the night before the race it was minus 20°c outside and the forecast for stage one was wind and snow.  Welcome to the Arctic!

The forecasted high winds made going seriously difficult throughout the day today as the runners crossed an exposed plateau after the first climb.  This only worsened as they took on the big climb between the final checkpoint and the warm cabin at the end of the stage.  We quickly learnt that a 20mph wind speed when it’s -18°c will make it feel closer to -35°c.  There was no easing us in to this race.

You have to make a point of remembering to look up at the view in a race somewhere this inhospitable.  There’s so much going on you can go for an age without looking at the amazing place you’re in.

Rather unfortunately I chose to look up and take in the view as myself and 2 other runners made our way down from the big climb.  The wind was screaming across us and I had my shoulder braced against it, laughably attempting to take cover behind a marker post about 3 inches in diameter.  My hands and feet were numb.  Whilst I looked back at the pair behind me falling over in the snow for the dozenth time, I took a look at the horizon behind them.  Through the furious white-out, I could just make out the jagged outline of distant hills in the final glow of the sunset, could just hear my new friends’ exasperated cries over the howl.  It was pure Hollywood.  It looked like the end of the world.

I imagine most people encountering a warm log cabin at the end of a long arctic day are relieved but few can have been more so than the group of runners at the end of that day.

There were 3 DNFs on stage one and a number of people who were out on the course for in excess of 12 hours; a long time to be exposed to the elements.  It was a shell-shocked set of runners who emerged from the huts for stage two.

Still, we quickly perked up as the sun rose over the mountains showcasing how beautiful this area can be when the weather isn’t trying to scour the skin off you.

It was a totally different day.  The runners were smiling and chatty all day, trading jokes at the checkpoints and even stopping to take a few photos of the winter wonderland they’ve found themselves in.

I got my head down and got into my finest military marching pace through the day and at CP4 I snaffled all my remaining snacks for the day and stuck a caffeinated energy and electrolyte sachet in my water.  The sudden rush of sugar and caffeine was profound and I entered the final section of the stage yomping my heart out and grinning like a lunatic.  A couple of kilometres from the finish line the trail began to veer steadily downhill and I ran.  The freedom of movement, despite the 9kg pack on my back and the snowshoes on my feet, felt amazing.  I crossed the line elated.

There was a luxury cabin waiting at the end of Stage Two and I was able to dry my clothes, eat a hot meal, take a warm shower and fit in a long nap on a sofa.  Later that evening we were evicted from this luxury condo and sent out into our tents to sleep for the night.  The temperature fell to minus twenty two degrees.  We all slept poorly on the cold uneven ground.

Stage Three was as much a mental test as a physical one.  Clear visibility on this stage can be a blessing or a curse.  On one hand you see the beautiful surroundings; the mountains and pine forests that sprawl around you.  On the other, almost the entire second half of the course is one long frozen lake on which you can see destination and know you won’t reach it for hours.  It doesn’t seem to be getting closer.

After walking for a while I looked around and realised that I still couldn’t see the other side of the lake.  A short while later I looked up again and realised the checkpoint behind me didn’t seem any further away.  I kept my head down a little longer before looking around again only to find that the mountains to my left and right looked  exactly the same as before.  Someone had put me on a treadmill in the middle of the arctic and I couldn’t get off.

It’s especially bad for anyone out there long enough to end up crossing in the dark.  Those lights appear at the end of the lake and seem to move away as quickly as you shuffle towards them.

Still, there was another toasty hut at the end of the stage and a real bed to sleep in.  We’d get some rest before the long stage.

Stage Four was endless.  A cut-off was imposed at checkpoint 5 where runners who took longer than 12 hrs to reach it were ferried to the finish by road.  3 runners were short coursed at this point.  6 more either didn’t start or were taken off the course by the medics today.  Thankfully the medics were amazing and the Sami team know how to get top speed out of a snow-mobile!

Cruelly the hardest part of the trail comes after the 50th kilometre when the runners find themselves in deeper softer snow just at a time when the accumulated calorie deficit is at it’s worst and the temperature is plummeting.  The cruellest twist though lays in the last 500m.  We emerged from woodland and saw the lights at the finish line on the other side of a lake which looked like little more than a paddling pool compared to the expanses of water we were used to.

However, this lake was dotted with half frozen surface water.  A thick layer of slush hiding under a few inches of powdery snow.  If your foot goes through into that soup, when you lift it out again you’ll find that it freezes solid and hangs on your snowshoes like concrete.

There was a large heated tepee waiting for us and the medics were using the sauna to warm people back up when we reached the finish.  Luxury!

It’s easy to assume that 15km is an easy day compared to the other stages. They even call it The Sprint!  Nobody was in a sprinting mood that morning.  We’d put everything into stage four and, though my pack was lighter my energy as well as my supplies were exhausted.  It is easy to underestimate this last 15km stretch but this is still the Arctic.  The medics had to keep a few people back this morning who they don’t feel are ready to risk another few hours in the cold.

The race finishes in Jokkmokk and it was an incongruous experience being back in civilisation again after 5 days.  Still, we embraced their reaquaintence with normality and, not long after finally crawling over the finish line, a few of us wandered off to raid the local supermarkets and drank cans of lager and ate roast chickens with our bare hands!  The atmosphere at the finish was one of relief, happiness and comraderie.  There were hugs and tears and laughter.  All the hardship of the previous days was forgotten.

After a few hours to recuperate, take a hot shower and sleep in a real bed the evening’s festivities began.  We all got together for some local cuisine, a medal ceremony and a fair few local beverages! 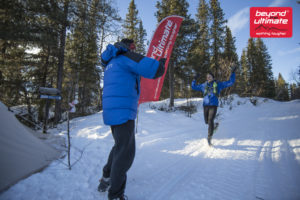