When I said to my kids that I was just popping up to the lakes to run a half marathon and that I’d see them later, they thought I was a bit mental. I justified it by saying to them that thousands of people do it for football every week and no-one queries it, so why not for a run. It didn’t wash, they still thought I was crazy. However, with a slate coaster on offer to add to the year’s mug collection, there was never a question in my mind.

Trev picked me up at 7.00am and we drove up to Keswick. Got there shortly after 10am. Got the race numbers, chilled for a short while then made our way to the start. This is definitely a race of two halfs. The first half was extremely hilly with the vast majority of the 1400 feet of climb featuring in the first 7 miles. After that it was plain sailing along the lake road back to Keswick.

Was great to bump into some of my Eden Runners friends at the end as they cheered me in. Dropped in to see my Dad in Penrith for lunch, then drove home, arriving back in Sheffield about 5.30pm. What’s not to like!

A great race and a great day out. Another half marathon that would come highly recommended. The race was won by Abraham Twelde (unattached) in 1.12.21. The first woman home was Catherine Spurden of Keswick AC in 1.27.31. There were 683 runners.

Massive thanks to Trev for driving. 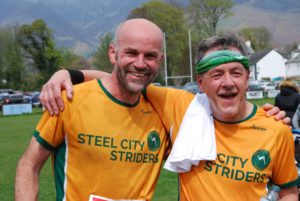