Hosted by Kimberworth Striders every year since 1985, this is a two lap trail race of just under four and a half miles held at Millmoor Juniors training ground taking in the surrounding woodland and hills of Kimberworth, Rotherham. The race starts on the former railway line that served Grange Colliery, which closed in 1962, before climbing up through Walkworth Wood. Once part of a Deer Park, this is an ancient woodland, recorded in the 1600’s as a spring or coppice wood maintained for supplying charcoal to the Earl of Shrewsbury’s forges. Evidence of early ditches and banks, built to prevent livestock from damaging saplings, can still be seen whilst remains of “Bell Pits”, primitive coal mines, are also visible. The remainder of the course resembles an Escherian diagram as it loops around the reclaimed site of the pit on a seemingly continuous uphill trajectory.

This type of race might be suitable for those who want to try off road but without the rough and tumble of a fell race and indeed a couple of Striders normally only seen on the road braved the blustery conditions. Neither however could beat first Strider home Paul Stuart who finished as third M50. The race was won by Arron Larkin, Rotherham Harriers in 24:21 ahead of 164 others who completed the course. First lady was Julie Wilson, Hallamshire Harriers in 30:48. Julie can often be seen training with our Thursday Evening Woodbourn Road track group.

If you want to learn more about the woodland of this area, which is close to Leg One of the Sheffield Way Relay, please see this link Woodland 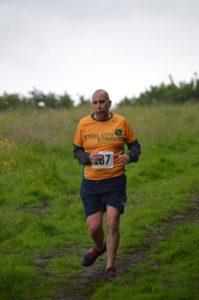 Richard Garton getting in before the next shower. Rank grasses and underlying surface are evidence of the former Grange Park pit.