I entered this race at the end of July, once I’d realised that I was recovering well after the West Highland Way. I wanted a local race that meant that I could maintain the distance that I’d built up. I also wanted to get a sub 12 hour, 50 mile time in order to qualify for a Centurion event in the future.

However, I hadn’t really considered a few things.

I really respect an ultra runner called John Kynaston. He recommends that you set yourself 3 targets for races – Bronze, Silver and Gold.

I knew that in order to be sub 12 I’d need to aim to do 25 miles in around 5 hours. I set out at a positive pace and was at 10 miles at 1h54. It was interesting talking to people as we started our first little loop. For a lot of people this was their first ultra. So many people set off flying and there was little concept of pacing.

Lots of people around me were delighted at averaging nearly 12 minute miles as they then expected to run sub 10 hours. I have to keep quiet as I don’t want to rain on anyone’s parade – but unless you’re an elite ultra runner you will not maintain that pace. You know you can run 5 miles at 12 minute mile pace, but can you do it after 45 miles?

I ended up putting in my headphones and just focussing on disciplining myself to walk the occasional incline, eating and drinking regularly and maintaining a strong pace.

I thought I’d hate the 2nd loop but I actually struggled more on the first. The speedy 20 milers kept streaming past me and it was hard knowing I was going to see this path again – TWICE. The weather was hugely different at the far end of the reservoir and I was pleased I was carrying gloves and waterproof.

I checked in at 20 miles and was careful about not wasting time at the checkpoint; 7 minutes in and out. I tried to maintain a steady 13.30 pace for the next 15 miles. I was getting thoroughly bored by this point and remembered how much I actually hated Ladybower. It’s a bit like Endcliffe Park. I did so much training there as I was learning to run longer that I have some sort of flashback every time I run through it! I made myself the following targets while running for my training in the Autumn:

I kept plodding on, passing an occasional runner. At this point, people new to the distance really begin to struggle. I knew that my mate Hannah was meeting me for the final lap, and the thought of seeing her pushed me on. I checked in at 35 miles around 3.35pm. I’d managed to hold a pace of 13.18 so I was pleased.

I had a fast turn around at the checkpoint and tried my best to keep the pace around 13 minutes, but by this point my legs were realising that there had been no real climbs and that I’d run much more of the 40 miles than I would do if it was a mountain ultra. My quads were in a real state, so I kept trying to maintain a mixture of run-walking, a bit more like Scouts’ Pace. My speed was dropping though and I’d secretly hoped I may push for sub 11 hours, but this was clearly going out of the window. This is where the target setting beforehand is so helpful. I knew I was on to be sub 12 hours with no problem, so I just focussed on that. As I turned back up the second (stupid) finger of reservoir, I saw Steve my husband in the distance. We walked the final 1.5 miles together and he was really encouraging about the time I would do. I finished on the dot of 11 hours 25 minutes.

I was really delighted to finish. I’d never ever thought I was capable of a sub 12 hour 50 miler.

My legs seized up straight away. In the true glory of an ultra runner, I scoffed crisps in the on the way home, threw up on the front step, sobbed at my chaffing in the bath and rolled straight into bed.

There was also Striders interest in the 20 miler with Caroline Woods Peel entering. This version has 111 entrants and 109 finishers. The 20 miler was won by Jose Dias in 2.30 with the first woman being Lisa Hynes in 2.36. Well done to Caroline. 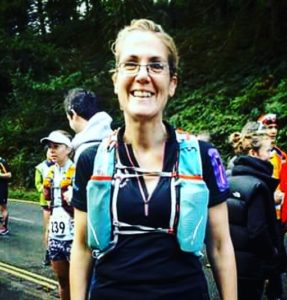