Despite the name, the Long Distance Walking Association is well worth checking out if you enjoy longer trail routes. This coalition of local LDWA groups welcomes runners to participate in their Challenge events. These events can be anything between 20 and 100 miles and they represent incredibly good value for money. The 25 mile Six Dales Circuit cost just £12 (a mere £8 for LDWA members) – for an extra £2 you could sleep on the village hall floor on the night before the event too! For that cost, you get pre-race refreshments, plenty of food at the three checkpoints along the route as well as a hot meal and more tea at the end. They also provide you with detailed route descriptions before the event and, on this occasion, colour copies of the route on a copy of the relevant OS map. What you don’t get for that is any sort of way-marking and whilst they will give you a time (and a certificate to prove it) its nigh on impossible to establish where you finished in the field. It isn’t technically a race after all.

So, on Saturday 11th November, Nick Burns and myself decided to attempt our second Long Distance Walkers Association event, having completed and thoroughly enjoyed the slightly longer Three Shires event (also run by Staffordshire LDWA) in Spring. We arrived at Biggin village hall and had a quick chat to the only other Strider participating before setting off at 9am. Most of the walkers in the 220 strong field had already left at 8, with the run-walkers departing at 8.30. The distinction between runners and walkers seems fairly arbitrary, given that the first of the ‘walkers’ reached the third, 19-mile checkpoint after two and a half hours.

The route itself is a stunner. From Biggin village we headed west into the first three dales of the day; Biggin Dale, Wolfscote Dale and Beresford Dale. No sign of the peregrines that were nesting in Wolfscote Dale in the summer. From there we headed across fields to the first checkpoint at Hartington. We were still both feeling pretty good, but the conditions were tough; deep soft mud and slippery limestone. I’d certainly wear something more fell-y than my Brooks Cascadias if I ran this again.

The next stage took us north along a stretch of the Tissington Trail towards Monyash village hall and checkpoint two. From there we headed east, so as to run the full length of the glorious Lathkill Dale, though the descent into the dale from the Monyash direction is technically pretty tough. It was good to see a Dipper in Lathkill Dale, though it was with some personal sadness that we didn’t climb towards the excellent Lathkill Hotel at Over Haddon for a pint. Once in the dale, the track improves markedly and we made good progress towards the point where the Lathkill meets the River Bradford, where we turned west along Bradford Dale (dale number five and a kingfisher), looking spectacular in late autumn colour.

Surprisingly, given the frequency with which he runs well beyond this distance, Nick was struggling a bit by this time, having not fully recovered from a virus a couple of weeks earlier. So we slowed the pace a little and got chatting to a group of four runners (there were 19 of them in total) from Great Bentley Running Club, Essex, who had taken advantage of the £2 bed for the night, having travelled up on Friday.  We soon reached the final checkpoint at Middleton (more malt loaf and squash) before heading back through Long Dale towards the finish at Biggin, where there was plentiful food waiting for finishers. We finished in a little over 5 hours and both felt we’d like to have another crack at it next year. So another excellent day out, courtesy of the LDWA. Interestingly, Nick sent me a link to an event organised by Pure Challenge – apparently the same route (though it claims to be 27 miles), but with waymarkers and a beer at the end for £45. You pays your money and takes your choice, I guess.

Congratulations to Jo Taylor, the other Strider. Who finished in 4 hours 47 minutes and (I think) may well have been first female finisher. 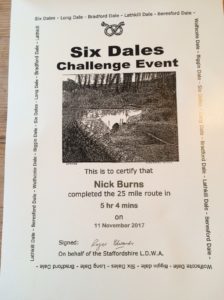