Loughborough’s sixth half marathon this year took on a new route, and the sun was out as runners tackled the 13.1 mile course that started and finished at Charnwood College on Sunday, April 2.

The marathon was organised by Living Without Abuse (LWA) – formerly known as Loughborough Women’s Aid – which is a charity that supports men and women suffering from domestic abuse in Leicester, Leicestershire and Rutland.

First over the finish line was Michael Coltherd with a time of 1:10:25

And the first female over the line was Lucy Niemz from Poplar Running Club, with a time of 1:25:43

Overall 672 runners crossed the finish line, and 723 took part in the race including the different legs of the relay race. 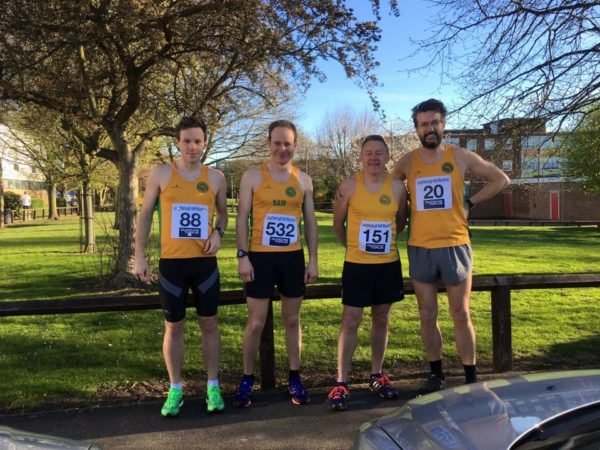 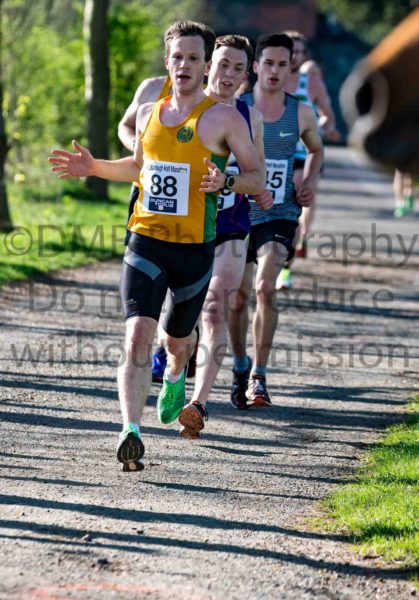 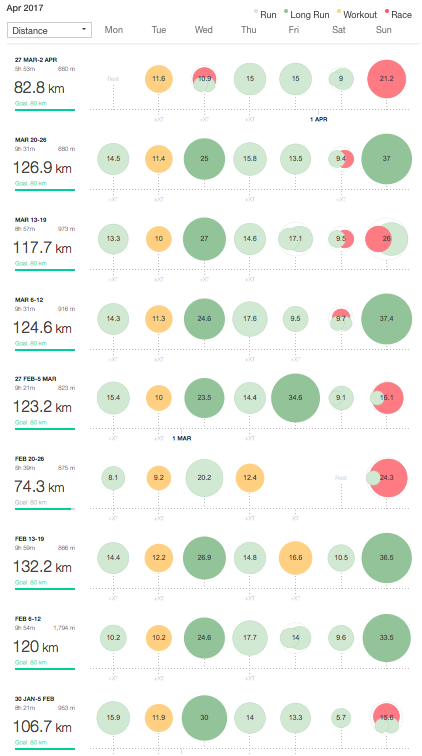 I’ve been getting ready for the Virgin Money London Marathon this year. I ran my first marathon last year at Manchester with the aim to nail down a Good for Age qualifier time. I finished in 3:00:19 and as soon as the Good for Age entries opened for London 2017, I jumped at the chance of entering.

I’ve been following a rough adaptation of a Pfitzinger plan since the beginning of the year. Mondays have been recovery days with anything from 8 to 10 miles easy and preferably on trail. Tuesdays are for track (something like this). Generally long reps with limited recovery. Wednesday I’ve done a medium long run. Anything from 13 to 18 miles, usually ignoring pace and just running for 2 hours. This is a tough one the day after track but I think it works really well for me. Thursday and Friday have been recovery days, around 9 to 10 miles per day. Saturday I’ve usually done a hard parkrun with a few miles either side. Sunday is the long run day, having done a few 22-23 milers so far.

I’ve stuck some longer threshold stuff in if I was volunteering at parkrun instead but I’ve kept my plan flexible. I’ve really enjoyed having a loose structure that I can adapt depending on the week.

I was persuaded to enter Loughborough by a club mate, Sam, who was also doing it and I was desperate to shave off those 11 seconds from my HM PB.

Pick up was 6:40am and we made the hour drive to Loughborough from Sheffield in glorious weather. Sunny but cool, not a lot of wind. Four of us were travelling from Sheffield but none of us had a clue about the course.

We collected our numbers with ease, dumped our bags in the boot of the car and lined up at the start line. The start line was on grass! It transpired that there would be two laps of a grass field, one at the start and one at the end. There would also be a lot of road crossings, a trail section and 2 muddy hill ascents. The sub 80 goal was looking a little ambitious on this course and I debated just running a marathon pace effort.

No gun, just the director on a megaphone. It felt like sports day at school! But off we went. Now Sam is notorious for setting off like a train. We found ourselves in second and third and he mentioned that we should try to get close to the guy in first. Fortunately my suggestion of ‘let’s see what happens’ was a good one as he went on to finish in 1:10 and we would have annihilated ourselves early on trying to get anywhere near him!

We went through 5km in a touch over 18 mins. ‘Shit, a bit quick’. However, there was a good chunk of downhill in this part and I felt good. We went over an overpass and 2 guys passed me. They glided up the hill with ease and began to pull away from me.

I went through 5 miles in 29:40 which put me well on track for sub 80 and I felt good. At this point I took on the first long uphill drag and managed to reach the peak in good shape. I hit the gas on the downhill, hitting sub 5 min/mile pace for a part of it. Turning the corner at the bottom of the hill I couldn’t see the 2nd and 3rd place guys and couldn’t see anyone behind me. If I was going to PB, I was going to do it alone. 10km passed in 36:44, just outside my (long course) PB but I felt good.

The muddy hill. Fortunately it wasn’t too slippy as the weather had been decent for the days leading up to the race, but it was bloody steep. Again, I shortened my stride, pumped my arms and relaxed up the hill, using the quality advice from Mick Wall. At the top, again, I hit the gas to make up for time. This is an aspect of the race I’m really happy about, being able to adjust my pace and look to accelerate when appropriate.

At the bottom of the hill, I turned right to begin the loop again. A little bit of wind on the exposed section made for tough work, but I felt so relaxed. My legs were a bit achy having been on big mileage and not really tapered for this, but my lungs felt good. A sign that training had went well!

My Garmin beeped for 16km (10 miles) in 59:37. A huge PB was on, I just had to stay relaxed, tackle the muddy hill and not push too hard too soon. The second loop made for some interesting running as some of the paths are quite narrow and at this point I began to lap a lot of the slower runners. The marshals did their job well though, warning people of me coming through and making sure they were available to hand out water at the two water stations.

I’ve found track work really useful for picturing how far I have left in a race to go and telling myself I can do it.

I turned the corner of a residential estate. A marshal shouted ‘Well done, you’re in fourth, just one more hill!’. ‘ARGH’ I screamed back. Another hill! And it was a short sharp one. The type that can kill off a race. I slowed here, slowed a lot. At the top of the hill, it looked like I was running directly at a fence. A marshal was positioned there who told me to run through the gap in the fence. It was like running through a kissing gate, stop, slide around the gate, start again. Not ideal at the end of a race!

I went through the gap in the fence and heard the drummers at the finish line, saw the crowds, basked in the sun and glanced at my watch. 1:17:17 with 400m to go. That’s 80 seconds on the track. Keep it together and you’ve ran under 1:19.

Alas, I got my hopes up too early as the marshals shouted to do a loop. They’d marked off the grassy field and I had a whole lap to do around the field which worked out to be about 600m instead of my expected 400m. Sad face. Even so, the finish line was glorious. Drummers, bananas and water, what more could you want. I finished in 4th position in a PB of 1:19:04.

I hung around and waited for my club mates, had a free massage and ate a banana. It was a fabulous day and the chunk of time I took off my HM PB has really made me confident for London now. It’s now Wednesday and I feel pretty recovered, managed a track 5000m time trial of 17:09 on Tuesday and 10 miles easy on Monday. This week is my last big week before the taper begins. Bring. It. On.

This post was generated using the new race reportr.