30 years later the pubs are still there.  I’m now responsible for 47 of them.  It keeps me busy, and can be a challenging environment when it comes to staying fit.

I’d had a couple of “comebacks”; A Regents Park 10k in 2000, but nothing that could keep my motivation levels up.

In 2012 I moved to Sheffield, started Parkrun in 2013, and then joined the simply inspiring Steel City Striders.  It has been emotional.  Ups, downs, injuries galore, but today I can call myself a runner.  I’ve lost over 4 stone, done 180 Parkruns, several 10ks, Half-Marathons, and a few fell races. The Peak District is my back garden.  There is no greater joy for me than running down the Limb Valley on a crisp Autumn morning

This year has been Marathon year. Aside from the Mile it has always been the event with the most mystique for me.  Until this year just a pipe-dream.  No matter how you look at it, it’s a long way.  Particularly if your intent is to run it as hard as you can.  Why wouldn’t you?

Reflecting now, two weeks after my second (well third, which I’ll go onto explain) you really start to appreciate it, and all the variables in what it takes to run a good one.  It’s a big learning curve.

Rotterdam came first in April.  Stayed in Amsterdam the night before (dangerous) and had not picked up my race number.  Poor night’s sleep and a very early alarm call to get the train was not an ideal start to the day.

I really enjoyed the first 18 miles, even though a jovial, cantering, Paul Stuart had passed me at half-way, trying to have a chat. The reality of the distance kicked in.  I’d run well to that point but the final miles’ pace deteriorated. Sheer determination, and a fantastically inspiring Simon “Striders’ Cheerleader of the Year” Hope, got me to the finish line in 3:26:21.  I was delighted, exhausted, and battered. I fainted on the train back to Amsterdam, rescued by some Yanks with glucose tabs, and my wife.

Assessing which race would fall into Autumn half-term I signed up for Frankfurt.

I also signed up to the McMillan marathon plan on Strava and decided to loosely follow it.  I kind of did, but the mid-week interval and tempo runs were the hardest to plan/achieve due to work commitments, meaning I would do them alone in London.  Only some got done.

Training was going well with long runs getting easier and easier, and Parkruns getting consistently fast.  Having taken an age to break 20 mins I was now running 19:10-19:30 for fun.

I believed the long runs were the important ones so a bright idea was to do Nottingham Marathon as a training run.  You know, just take it easy and enjoy it.  It was a month before Frankfurt so I thought it fitted in well before the taper. You live and learn.

Race day arrived and I felt great. It was a nice day, and the atmosphere in Nottingham was buzzing. I thought what if today’s the day and I should give it a try.  Then I could just enjoy Frankfurt. I set off too fast.  Ran the first half in 1:38:55.

The big disadvantage with Nottingham is that’s it’s really a Half-Marathon with a Marathon tagged on.  At least that what it felt like.  At half-way, everyone just disappeared.  I’d been running in a group. In the blink of an eye, I was on my own.  It was suddenly hard going.

I again started to struggle at 18 miles, but this time I had no Simon. In fact, I didn’t really have anyone.  At 20 miles I hit the wall, bonked, whatever you call it.  I simply couldn’t be arsed to carry on, and stopped.  It was a very long walk, the full remaining 6 miles, to the end.  I didn’t cross the finish line.  I sat on the grass in the sun and had a banana.  I didn’t faint.

I did go down with a virus though, and missed a week of training.

With 3 weeks to go I was back in the game.  Back to the training plan.  I still felt good.  My final long run, a steady 16 miles was planned for the Sunday before Frankfurt.  Storm Brian was looming and I was really needing some motivation to get out there.  Was there a race I could use as a training run?  There was. The Holmfirth 15. You could enter on the day and at least they’d be other nutters in the wind and rain.

I ran what I considered to be steadyish, but found myself running 7:30 pace.  I felt great.  Even thought I’d put a spurt on at the end and gain a few places (why?).  I ran the last mile in 6:08.  I was ready for Frankfurt!

We (my wife the support party again) dropped the kids off with my parents in Staffordshire on the Friday evening and headed to Birmingham Airport where we stayed overnight, ready for our 0830 flight.  The train into Frankfurt was simple. We were standing in our hotel by 1300.  The Expo and Marathon start was a 10-minute walk away.  My planning was perfect.

Race number and gubbins were easily picked up.  Pasta was eaten. After a rest in the hotel, just the two beers were consumed, and a dinner of Schnitzel and Vegetables. We had an early night.

On race day morning, the clocks had changed so I was a bit confused, having had the hour time difference to factor in as well. Effectively we were back to UK time.  The race started at 10.  Pre-race prep went well.  All bodily functions sorted. I got to the start line calm, and ready to race.

Take the first few miles steady and then enjoy it.  I knew I had to run 7:38 miles to break 3:20. That was my first goal.  Beating my time from Rotterdam was my second.  After the experience of Nottingham, finishing it was the third.

The first part of the race winds around the city streets. All pretty flat, but it was busy, so a lot of negotiating for clear running space.  First 6 miles were between 7:35 and 7:55. I had to step it up. I did marginally for miles 7 and 8 (7:22 and 7:26).  I then ran the next 16 miles between 7:32 and 7:50, with most around 7:45.  The rest of the course was undulating but nothing like running around Sheffield.  There were spatterings of cold rain, and a bit of blustery wind at times, but nothing major.  Miles 8-23 were very much out of the city and along much quieter roads but still good support.  I just never felt my mojo.  That power (springy legs) you get when you are running well, and happy, just wasn’t there.

I knew where the finish was so was a bit surprised when mile 26 vibrated on my wrist (7:59). It was still a good way to go.  I needed to run faster.

The finish at Frankfurt is spectacular.  It’s in a massive hall, with a red carpet, thumping music, flashing lights, and cheerleaders.  The organization is smooth throughout and I would recommend the race to anyone who wants to run a high-quality marathon with PB potential.  Frankfurt is a nice city to spend some time in. Getting there is easy.

So now what. I was a little disappointed. I know I can run a better one. I need to run 7:20s for GFA and I believe I can.  I’ve read Hanson’s Training Method since and I will adapt that into my training.  I’m looking at London if I can get a charity place. I’m on a waiting list for Shelter.

I think my main learning was a) not having a deliberate marathon pace and then b) not doing anywhere near enough runs at that pace. Was I trying to run 7:20s or 7:40s?  In the event I ran neither.

I had a complete week off after the Marathon and have just done some easy running this week.

I ran an 18:46 Parkrun PB this morning and am heading to The Roaches for the fell race tomorrow.

See you all around.

On his marathon debut, Dewi Griffiths (Wales) bagged 5th place.  He ran the fastest marathon by a Briton in 3 years. 2:09:49.

Our very own super Strider Mark Gray (Sheffield) was not far behind these guys. 2:43:05. 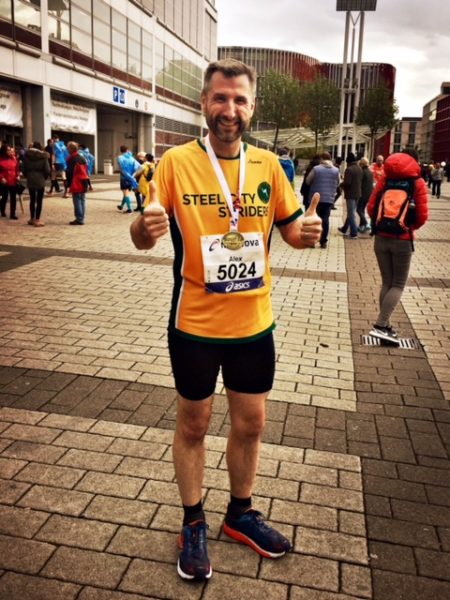 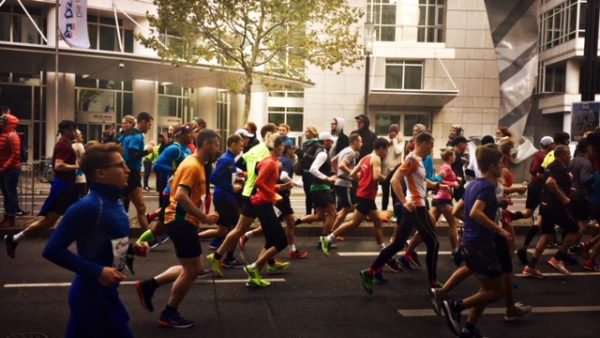 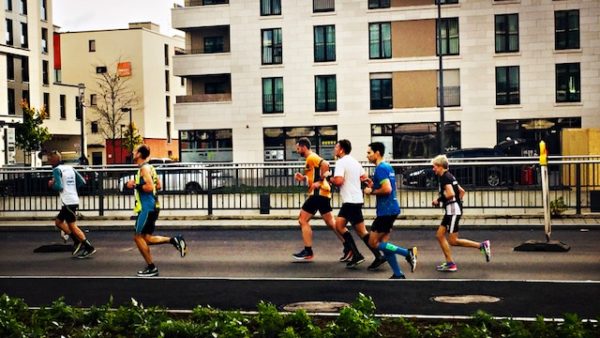 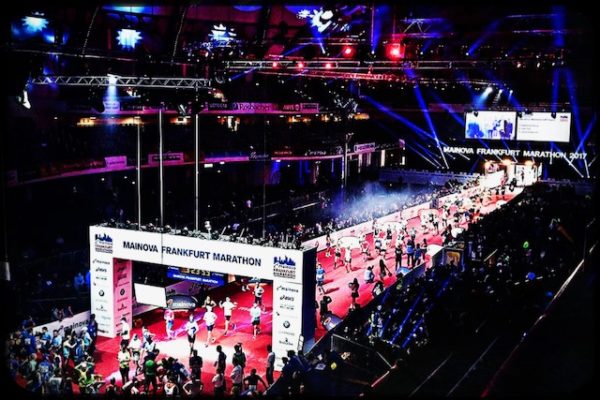 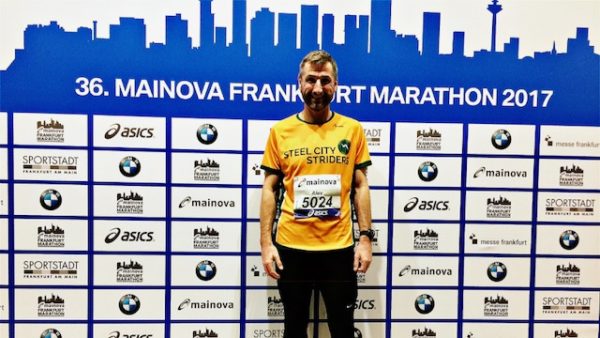