One thing that’s always guaranteed is MUD! Lots and lots of oozy, gooey, dirty mud. This year didn’t disappoint. After the brand new Striders tent had been erected, we all admired the state of the youngsters as they were coming in from their races. Blimey, they were covered, some head to foot. Obviously the opportunity for a few face plants were available – just a shame Andy Wuff hadn’t joined us for this one.

The weather was a bit chilly to say the least but that did not deter the purely athletic Mr Pegg from munching on a pre race ice cream. I was more tempted by the Pot Noodles in the refreshment tent but I thought better of it.

The women’s race came first and the Striders just managed to scrape enough women together to make a team. Well done ladies for making the effort. The rain decided to make a brief but significant appearance during the ladies race but they were well supported by the men huddled inside the tent, keeping ‘warm’.

The men’s race was a 12km race, 1763 runners, with a bizarre extra small lap, medium lap, large lap and extra large lap. I think they were trying to cram as many muddy water crossings in as possible. The course was very runable that being said but there were some really ‘interesting’ parts to it that led to us all being very dirty by the end of it. However, we all enjoyed it immensely.

The men’s race was won by Ben Connor of Derby AC in 39.35. Well done to all participating Striders. Great fun was had.

There was 2 different team competitions for the men, the 6 scoring and the 9 scoring. 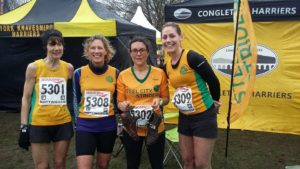 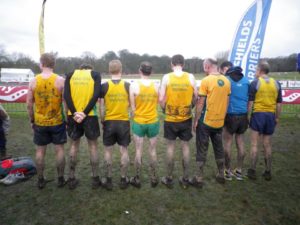