Vets track season starts for 2017 and we headed to Cleckheaton (Spenborough) for the first of the four Northern Vets fixtures of the season.

For those uninitiated in Vets events, I wrote this post about masters / veteran racing.  Basically, anyone 35 years and over can compete in various track and field events against other seemingly mad older folk. 🙂

Throughout last season I ran 100m and 200m at each 5 meetings that I attended.  If you read my reports from last season you’d have picked up the theme that in 100m I could never get out quick enough at the start which left me with little chance of winning races.  Whilst 12.8 is okay, its not good enough to challenge.  So at the first event on this season I decided to ditch 100m, stick with 200m and have a go at 400m instead.

Upon arrival at Spenborough for a 7pm start we were welcomed by a chilly and very windy evening.  The wind down the back straight was really strong and would not help with most of the running races.

Sadly, attendance was very poor.  Maybe it was the weather, maybe it was other events this week, maybe its too early in the season?  Not sure.  But its really disappointing that in the whole of ‘the north’ we can’t get more runners aged 35 and above at these events.

The field events seemed a little better supported which was nice to see.

The lack of competitors meant that the schedule was whipped through quicker than usual.  Our 200m races came round pretty sharpish and we were brought to the start line.  As there were 9 of us running we were split in to two races.  Older folk and a lady in the first race, some of us younger ones in the second.

There are usually straws drawn for lane assignment, but this time it was a free for all.  I missed all this taking my top layers off, so ended up in the outside lane of the 4.  Idiot.

So I had no idea what was going on in my inside apart from the patter of feet.  I’d ran against 2 of my 4 foes before and both Burnley lads had beaten me over 200m, so I knew I had my work cut out.  On reflection I got out ok, but I don’t think I went hard enough in the first 100m.  This meant one of the lads on my inside got about a metre on me as we came into the home straight.  But with a person to chase I put the hammer down and whilst I was catching him with every stride I was sure I hadn’t caught him, but only by a gnat’s chuff!

The timekeepers seemed to agree as whilst they put him in 1st spot they gave us the same time.  Its that a draw?  Or a win?  Not sure. 🙂

All in all, sort of satisfactory as I equalled my second best time of 2016 on my first run of the year in terribly windy conditions.  I’ll take that as a decent base to go from.

We barely had chance to get our breath, put some layers on and have a jog about before being called for the 400m.  Cue mass disgruntlement from those who had just ran the 200m.  Not so many complaints from those that had either ran earlier races or had just come for the 400.

8 of us wanted to run the 400m which would have made for a great big race, but due to a shortage of timekeepers it was decided to split us into two races of 4 runners.  Knowing some of the lads in the first race from previous meetings I knew the first race was going to be a bit tasty, so I was glad to be in race two.  Although I was up against my Burnley nemesis from the 200m once again.

A sad fact of life is that as you get older you need more time to recover.  Hence the grumbles about having to run a full on 400m around 20 mins after going flat out at 200m.  You just can’t do it.  I was on the inside of the Burnley chap in the race and I thought i’d track him for the first 200 and see what happened from there.  What actually happened is that my legs would not work properly from about 50m.  Stiff as a board and unable to do what I wanted them to do.  So instead of reining him in as the race progressed he just went away from me.

As expected, the first 400m race was quick and competitive.

So my 400m debut turned out to be a very disappointing experience.  I’m certain i’m faster than I showed and would like to think I can get closer to the 60 second mark.  But my legs were not going to allow that to happen this time.  So begs the question whether in short meetings like this if its possible to run your best at two distances?  It seems a tough ask?

But on the other hand, an hours drive each way does seem a long way to go just race for 26 seconds or 60 seconds.

Full results from the night should be on the Northern Masters website and Power of 10 soon.

So onto the next fixture, Wednesday 8th June at Sport City in Manchester.  I ran this one last year and its a fantastic arena to compete, in the shadow of Manchester City’s Etihad stadium with a decent turnout.  You can read the report and see pictures here.  I hope some of you will consider coming across with me, giving vets track a try and supporting vets racing.

I’ve also enclosed below the full fixture lists taken from the latest Northern Masters Magazine.  Note the British Masters event at Woodbourn Road in September.  There will be some high class athletes there for sure.

Hopefully see you all on the track soon. 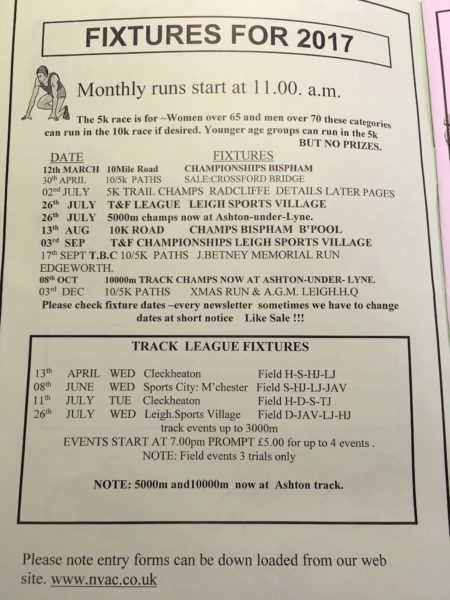 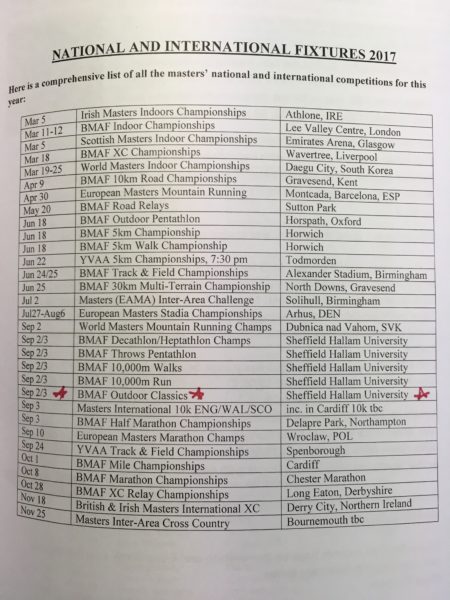