A disappointing Striders turnout of 4 females and 7 males for the Northern XC. There were a number of extenuating circumstances such as illness, injury or a visit to the cinema 😉 but the merry band of Striders that exchanged a 52 seater coach for a much more compact and bijou 15 seater were small in number but big in heart. And boy did we need to be as we trudged either 8km for the women (2 laps) or 12km for the men (3 laps) round a field churned up with 6 to 8 inches of thick oozy mud. Character building and strength sapping were examples of phrases that rolled off the tongue.

The women went before the men and 361 of them battled it out through the mud. Claire Duck of Leeds City AC emerged victorious in a time of 30.46. Sadly the Striders women’s team came last out of the 44 teams but hey, we weren’t bothered. Great fun had been had. Well done to the 4 women Striders who braved the elements and the mud to have fun.

The men went off at 3.05, just as the sun was beginning its descent. By the end of the race, the cloud had cleared and we were treated to some blinding late winter sun, It made tricky underfoot condition even trickier but it was a welcome bit of warmth. John Rawlinson tried one lap in his fell shoes but decided enough was enough. Spikes were definitely the order of the day.

676 runners in the men’s race over 12 km of sludge. The winner was Ben Connor of Derby AC in an amazing time of 41.13 – no idea how someone can run that fast in those conditions. The 6 remaining Striders all finished to make up a team score and we never came last, only second to last – but we all had fun. Big thanks to Adam Taylor for his great time which kept us off the bottom. 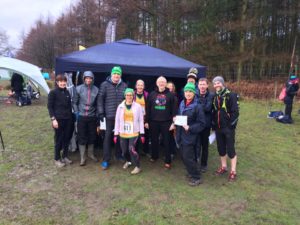