This event had a good number of Striders at it last year, as it was in the fell race championship. What better than a bunch of Striders running around Bleaklow in blizzard conditions looking for little orange and white flags? Maybe that was what put people off instead. Sadly, only one Strider, Joe Buckman, attended this event this year and instead of being on his lonesome, he gatecrashed the Totley AC party.

Overall there were 146 solos/pair/scoring teams in this event with a maximum of 500 points available in a 3 hour time slot – but don’t be late otherwise you could lose them all. Late penalties are harsh. The winning score this year was 480 points in a time of 2.55.40 and was achieved by Philip Vokes of LUOC. The first women were Becky Raftery and Laura Goy of SYO who scored 390 points in 2.51.22.

Joe teamed up with his better half Jo and scored 265 points in 2.51.25 and finishing in 66th place so well done to you both. In the mixed pairing class, they came 4th out of 17 which shows what a good result it was. 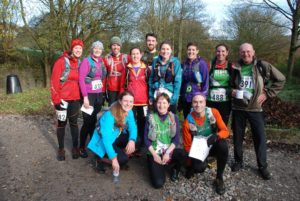