A glorious spring morning greeted the participants arriving at Bradfield Village Hall for this, the second in the Spring Trail Run Series.  The Series aims to provide routes in “spectacular and scenic areas of the Peak District in order to introduce people to new tracks, trails and places they didn’t know existed.”  Entrants have a choice of long (14-17kms) or short (5-7kms) course which are run on as little road as is practical.  What roads there are are usually quiet country lanes.  Kit requirements do apply, most notably waterproof jacket, windproof leg cover and offroad shoes, but the former two can be relaxed according to the prevailing weather conditions.  They can be run as individual races or as the series.

Staggered start times at 10-minute intervals with only around 15 to 20 competitors in each group ensure congestion is kept to a minimum.  Turn up five minutes prior to your allotted time for a short briefing, dib in and you’re off.  After a straightforward start through a narrow trail behind the hall, the route took a steep stairway climb onto Smallfield Lane (at which point I remembered to start my watch) and after a short road section it was left into the woods alongside Agden reservoir, the first of three reservoirs the route bypassed.  A knotty, tree root-covered path led alongside Agden before the day’s main climb, 300ft away from the water and up onto Windy Bank.

It had been a tough opening two miles by the time we left the road and began a steep descent towards Dale Dike Reservoir.  “What goes down must go up!” shouted James Fletcher (who had sportingly decided to run with me) as we reached the bottom and crossed Dale Road for a lap of Dale Dike, where patches of thick, deep mud threatened to pull off my shoes.  Four miles in, and sheltered from any of the breeze, this was probably the most tranquil part of the course…a woodland path alongside the a millpond-still reservoir where the only people encountered were runners from some of the earlier groups.  Perfect.

After rounding the head of the reservoir at Holes Wood and skirting back along the far side we then headed into Andrew Wood and began the second climb of the day, ascending via a muddy and rocky path.  On emerging from the trees there was then a quick descent along Blindside Lane to the dibbing station and water stop at around the five mile mark.

From here the going became more straightforward and it was an opportunity to pick up the pace a little.  A gap in the wall led to a track along a hillside to Plumpton Lane and eventually the end of New Road (the turning point for the Percy Pud) before dropping down to Damflask Reservoir for a full circuit.  The starter had warned us to take extra care around Damflask because we would see considerably more people around there than we had for the previous two reservoirs, and he wasn’t wrong.  The weather had brought out any number of families, walkers, dogs and other non-competing runners.  For me this added to the enjoyment of the event, being able to say “hello” to people you passed in either direction, everyone out enjoying such great conditions.

We joined the road across the dam and turned for home on the opposite side of the reservoir.  Soon the ‘1km to go’ sign appeared and shortly afterwards we were out onto the bottom of Lamb Hill before entering the field for the finish outside the village hall where tea and cakes provided much-needed refreshment and a chance to sit in the sunshine and look back on what had been a fantastic route in a beautiful part of the Peaks.

204 people took part in the Long Course and 37 in the Short Course.

The Long Course race was won by Andy Harding from Belper Triathlon Club in a time of 1:00:07.

First lady on the Long Course was Helen Longden from Totley AC in a time of 1:13:09

The Short Course was won by David Locke (unattached) in a time of 23:35

First lady on the Short Course was Sarah Martin-Smith from Belper in a time of 24:49

The third and final event in the series is in Biggin on Sunday 7th May, entries to which will be open until 1200hrs on Friday 5th May.  More details can be found on the website at; 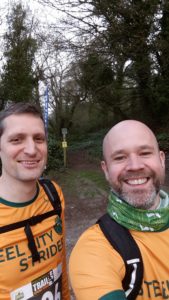