This was the third and final event in the Dark and White Events Peak Trail Spring Series, a series which aims to provide runners with challenging routes in relatively unknown locations around the Peak District.  Each event is 14-17kms long, with a shorter course option of around 5-7k.  Biggin, a small village in southern Derbyshire, was the venue for this race.

Runners, after registering in the village hall and collecting their dibbers, take a short walk from the hall to the start point where they go off in groups at ten minute intervals. From the start there was a steady descent into Biggin Dale Nature Reserve followed by a long, gentle ascent to one of the highest parts of the course, with views across the Peak District. There then followed a short, rocky descent into Beresford Dale before the foliage thickened and we entered woodland before picking up the trail at the side of the River Dove as it meandered its way along.  Wide, open fields had by now given way to the steep sides of the limestone gorge of Wolfscote Dale.  This was particularly special for me, bringing back as it did memories of a primary school trip to Hartington where we had walked this route as young students.

Drinks and snacks were provided at around four miles and the route continued its track by the river, the hard, dry path passing through sections of shady woodland amidst dramatic, steep banks on both sides.  We met a couple of walkers but other than that the only other folk were our fellow runners and the odd one or two coming in the opposite direction.

Of course, following a river downstream for several miles can only mean one thing…we were descending, and had been for some time.  I’d checked the course map on Friday and my attention was drawn to a highlighted section declaring “250m thigh-burning climb!” around the seven mile mark.  Turning another corner it suddenly honed into view.  James Fletcher, who rather sportingly ran with me again, had joked that the only way out of the dale was up one of the sides, and so it proved.  A blue arrow pointed us away from the river and up a steep grassy path up the side of the gorge.  A few runners were already strung out along the path, all walking by now, many hunched over with hands pressed on thighs as they climbed.  Some shade provided by a small copse gave us a little relief as we tracked along its edge but it was still extremely tough going – more fell than trail.  I likened it to the ascent start of the Salt Cellar route after you leave the path behind Derwent Dam.

After passing through a kissing gate the path opened out into a grassy field where I rummaged around in my bag for a drink as the incline gradually began to shallow.  After much needed refreshment I started to gently jog again and after a short distance we were onto the home stretch, around 3k along the Tissington Trail.  This was, in truth, the only slight disappointment of the route – a long, steady ascent on a wide hardcore path.  With the sun out, surrounded by rolling hills, it was still beautiful, but a bit of a comedown after the dramatic scenery of Wolfscote Dale.

With less than one mile to go we left the trail via a steep, slippy gravel path, on which I feared I might deck it, before joining another selection of runners across a couple of fields and a gentle, fast descent to the finish line.  From there it was a short walk back to the village hall where tea, coffee and a slice or three of cherry madeira were the order of the day.

Although the routes change every year I will undoubtedly be signing up again for 2018.  Participation this year was £42 for the whole series, although you can compete in them individually if you wish, and there is an early bird discount available. There is also an Autumn Series available, all venues TBA at this stage.  More information and full results can be found below; 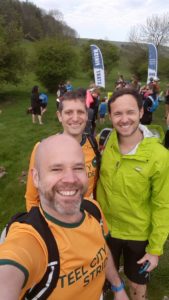