Organised by Rolls-Royce Harriers with race headquarters at Mickleover Sports Club near Derby, this excellent little midweek race costs only a fiver to enter. Heading out along country lanes towards Etwall, the final 4km returns along National Cycle Network route 54/68 which links Derby with Birmingham. This part of the trail runs along the course of the Great Northern Railway; closed under the Beeching axe in 1965 it had a new lease of life as one of British Rail’s test tracks until 1990. The route is not entirely flat but then it’s not hilly either although some may dislike the slight but relentless incline back up the railway line towards the finish at Mickleover Station. 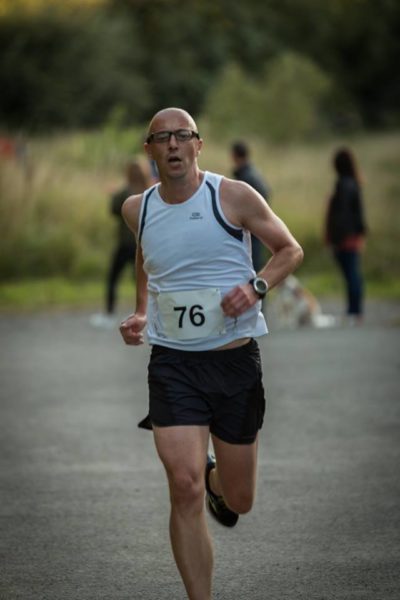 With a bit of shoulder rotation as he powers on towards the finish, Stephen risks getting a visit from the Strider’s Ethics Committee for his failure to wear his gold and green vest. We understand however that this had yet to emerge from the wash after last week’s race.

Our sole Strider Stephen Atkinson continued his comeback, improving on his last 10k outing by ninety seconds to finish 49th in 44:36. The race was won in 32:00 by Jamie Roden (Sale) whilst the first woman home was Wendy Mullineux (Heanor) in 40:22. Over 80% of the 171 finishers were members of an affiliated club.