Its the 3rd year of the Yorkshire 10 mile, a companion race to the Yorkshire Marathon which it shares the course with. Starting at York University, into the city centre and along Parliament Street, round past the Minster and out of the centre via Monksgate into the surrounding villages and countryside.

Its a flat course apart from a climb up to the finishing straight with excellent support all around the course.

3177 runners finished the race which was won by Dominic Shaw (New Marske Harriers Club) in 50.15 with the ladies race won by Tanya Blake (Stainland Lions Running Club) in 1.03.18.

A number of Striders made the journey up to York for this race, and 4 of us had the fortune/misfortune to be interviewed by Radio York (me, immediately after i’d finished). By the power of the internet i’ve managed to get a part transcript which I hope will make semi entertaining reading!

It’s just the most delightful sight at the moment, as Alice has just mentioned, the body has been put through such a huge amount of endurance and there’s guys in front of me at the moment high fiving each other, can I interrupt your celebrations it’s just so nice to see you all high fiving and hugging, how was it?

Painful, where did the pain strike

Andrew: From about the start

But your from Sheffield, the Steel City Striders so Im presuming you’ve done this before, haven’t you?

Andrew: Not this one no, its relatively flat apart from that hill at the end, that cheeky little hill

Everyone says that every year

Wuff: After you’ve done 9 ½ miles of flat you need a little test at the end, and coming from Sheffield we’re used to it

You’ve got seven hills in Sheffield, its better than Rome isn’t it? How was it for you Rob?

Rob: Brilliant, I did the Marathon 4 years ago so it’s a little bit of a comeback but yeah, really enjoyed it

Wuff: We’ll be back next year for the Marathon

So why not this year? Could you not get places?

Wuff: I’ve just not got my training up to that Standard

Something to aim for, What was the best bit?

Kim: oh, definitely the crowds, the crowds are incredible, really cheering you on and I liked the hill, the hill at the ends good

Wuff: And us waiting for you at the end

I love the fact you’re all just high fiving and hugging, its just a real team effort isn’t it

Rob: We are the friendliest running club in Sheffield, without a doubt 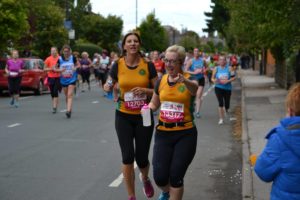 Sharon & Helen looking for the finish (picture from York Press)