The Plusnet Yorkshire Marathon has quickly established itself as one of the highlights of the White Rose County’s sporting year. This popular and picturesque run, with fantastic PB potential, takes participants past some of York’s splendid historic sites and along scenic country lanes, making it an attractive prospect for runners of all abilities.

Described by the Daily Mirror as the ‘Number 1 Alternative to London’, the Guardian also rated it as a perfect run to ‘nail your PB!’. A number of Striders travelled up to York for a variety of reasons, some running their first marathon, some running a marathon after 5 weeks out with a stress fracture (mentioning no names) and some looking for that elusive GFA time that many of us will never get close to!

The race was won by Ross Houston (unattached) in 2.24.13 with the first lady to cross the line, Tracy Millmore (also unattached) in 2.46.09. Well done to all that took part.

In a departure from the usual race report format, Stuart Jones has kindly shared the thoughts that kept him going in his 3.38 hours in the York countryside. Over to Stuart.

Twenty six point two miles is a long way, and running it takes a long time. Some fill the time with music, some with conversation with a running partner, a few with talking books. Not being one for the headphones, and running solo, I always have time to think. Unfortunately, the efforts shatter any focus I have, and my thoughts are scattered into as many pieces as tenths of miles on the route.

Here are a few of the topics I wondered about whilst wandering about for a few hours on Sunday:

– Plenty of parking places being essential for good access to the race start,
– The cash value of the sportswear industry,
– Archbishops, Fathers and women Priests,
– Beautiful English rural villages, with village greens, gentle streams and houses restored in the 1860s,
– Houses I could never afford, of a scale that must mean no child of the house will ever leave home,
– Early walkers, by Mile 4,
– Must slow down, must slow down – 8:35 is too fast at this point, too fast,
– Invisible ‘walls’, an established phenomenon that did not hit me or, seemingly, anyone round me,
– Inviting pubs and glasses of beer in the hands of locals,
– Fallen sweets and the five second rule,
– Varying gel viscosity – the first one shot over my hand causing stickiness until the next water stand and a rinse-off,
– 180o turns, and a peculiar agony of rubber-necking the leaders going in the opposite direction but a pleasure from seeing how many were behind when coming back,
– Parkruns to go, from eight – I cannot have been the only one counting this,
– Aiming for the water bins, and missing three in four,
– ‘Not a hill’, telling myself this on all three rises, and not losing too much time this way,
– Spectator points and families at the end of farm tracks meaning there was a surprisingly good level and number of support all around the course,
– Why Stockton is ON the Forest,
– Pacers’ posses, like honey-pot tourist attractions,
– Acting less a conversationalist than a commentalist,
– 74, and multiples of it, a number that is my resonation and that I return to frequently to ponder,
– Hot air balloons,
– Where all the students were,
– Whether Erdinger has a hint of baked bean, and whether the thought would put me off,
– How long I could sustain an 8:23 minute mile pace,
– Remedies for thigh chafing, and if available at the roadside,
– How much time I might lose if I stop for a roadside chafing remedy,
– Whether I’d be able to restart if I did stop for chafing support,
– Why only one thigh is chafing,
– What the difference is between ‘chafed’ and ‘chapped’ (and why ‘chafed’ has only one ‘f’),
– The irrationality of Scots pipe bands playing Irish classics,
– What that pain is and whether it’s going away at any time,
– Where to wipe the sweat off once the vest is soaked,
– Who is the woman alongside just now? And how does she know I’m a teacher?
– Now on an 8:21 minute mile pace? How fast must I have run miles 19 and 20?
– Did I miss Stamford Bridge? When was that? Where are we up to on the route map?
– Go Strider(s)! Calling out to Striders going the other way, or that I unexpectedly pass on the way,
– Calculations of pace, finish time, and how long it would take to finish if I start walking at the next mile marker,
– How much time the extra 0.2 miles is going to take, calculated over and over again as I can no longer hold a number in my head long enough to calculate a four–part problem,
– Bleeding nipples, (just the right one), but a distracting soreness,
– Can I really beat 3:40? Really?
– Running in with a flag – will the tv cameras pick it up, could it get me on tv like Ben was?
– Why medal ribbons aren’t given a half-twist,
– Food of the Gods – is that a jam sandwich, chips and ketchup, or cake?
– Making sure your drop-off bag is a different colour –bright yellow is good.

The whole thing cost entry, travel, overnight accommodation, park and run, evening meal, new running shoes, standard charity donations, extra gels, and it was still worth it for a good day out and a hell of an achievement. 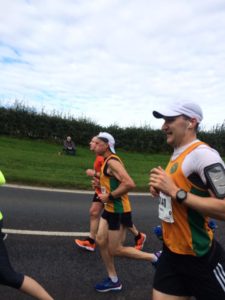 The Hague twins powering to a matching 04.07.22 (photo from Ben Jones)