The alarm bells should be ringing when the race organisers state that “we were not feeling particularly sadistic when we set the course”. The old Potteries Marathon (Stoke-upon-Trent) which ran from 1982 until 2004, always had a reputation for being one of the toughest in the country and it would appear that the Potters ‘Arf follows in this tradition. Times posted are evidence of this, for example race winner Ben Campbell (Tipton) ran 70:53, some 2:30 minutes slower than his pb which is a lot when you can run that fast. On top of this it was a warm 17 degrees and breezy too; just right for hanging out the washing to dry.

Five Striders either didn’t know nor care about any of this and even though one went as far as describing their own performance as “shameful”, Simone Young-alls managed a pb which is simply outstanding. Stating that this was the hardest half that she had ever done, even harder than Sheffield, it looks as though Simone’s training is paying dividends and she is targeting another race in the near future. Strike when the iron is hot as they say. 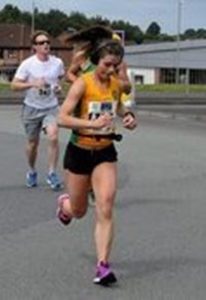 Simone in the zone at five miles with the dreaded Milton Road still some way off (Photo Bryan Dale/Rob Macphail).