“As races go you’d struggle to find a race as tough.” This is one of the claims made by the race organisers which also include hyperbole such as “an incline to turns the quads to jelly” and “plummeting, and it’s a definite plummet” so it’s no surprise that a perusal of the results on Run Britain shows many competitors running far slower than on the more sedate courses around. (There were some pb’s too but these people just couldn’t have been trying hard enough previously. Ed.) Using typical English understatement, Strider Karl Patterson described the course as “very hilly” although he enjoyed some great views past the Roaches; one wonders if this euphoria may have been caused by a lack of oxygen to the brain. Suspicions should have been raised when the t-shirts were handed out before the race; perhaps multiple drop outs were expected? Karl puts his performance down to the pre-race advice offered to him by Paul Stuart on the start line together with his further encouragement given en-route.

But at the sharp end of the race the watch, rural atmosphere and over 1200ft of climb counted for nothing as Simon Myatt (Trentham) won in 76:05 whilst local lass Jennifer Rich stormed home in 15th place overall to claim the prize as first lady attracting the attentions of BBC Radio Stoke. Jenny did especially well considering that she had a calf problem form ten miles onwards – we hope that this doesn’t put back her training and racing too much. 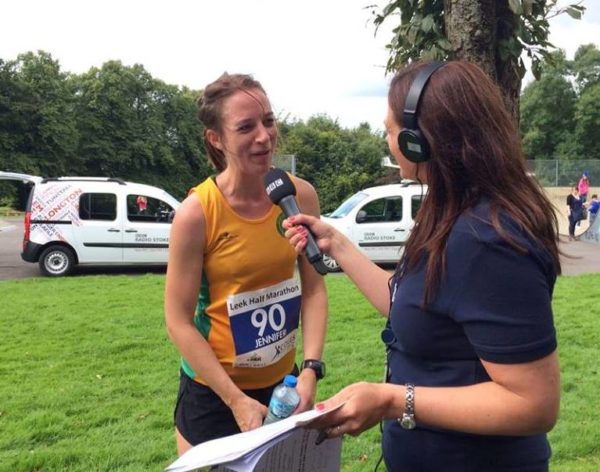 Jenny being interviewed by Radio Stoke. Whilst confessing that she was over the moon, she was far too polite to mention that she would have been pleased to have finished in front of Gemma Barnett (Vale Royal) who beat her in last year’s race. (Photo BBC Radio Stoke)

There were 245 finishers this year, up 33% on 2016 although well short of the 2000 places mentioned on the pre-race blurb.  Originally hosted by Staffordshire Moorlands AC, this race was nearly lost to the calendar when it was cancelled in 2014. The race, with a new route too, is now organised by the same team who put on the Alsager 5 plus the Meerbrook Five, which is perhaps better know to Striders. Without club support and with few positive reviews, we shall see if this event survives for another year.

Leek Half Marathon Results Karl insists that his watch said 1:44:31. 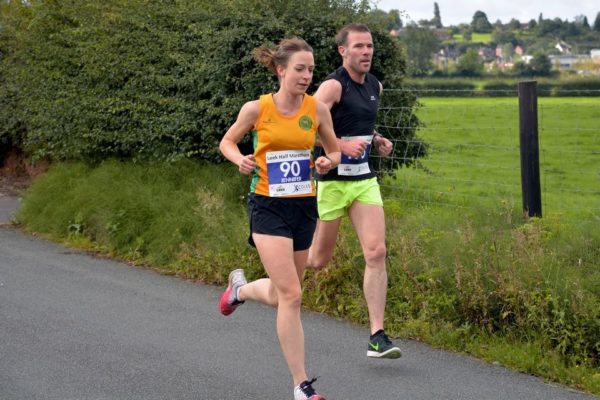