Everyone knows Richard Pegg loves Norwich City. Throw in a first day of the season trip to London, Fulham away, which happens to coincide with a QEOP monthly 10K and he’s as happy as a pig in ……. All the stars were aligned for Peggy this weekend as Norwich also snatched a last gasp equaliser to make a potential defeat seem like a victory.

For £16, you get to run 10k and also get a medal. If only they were worth as much as a London marathon medal! I think Peggy’s Mum might think so because her first words to him on his return was, ‘where’s your medal?’

The race was won by Tsukasa Kawarai of Yakitori RC in 34.32. The first woman home was Gerda Steyn of Nedbank RC in 37.33. 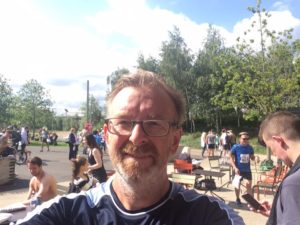