“You’ve come all this way, now make it count” were the words from Dad before lining up at the start line for the final race of the 2017 Striders Fell Race Championships. A beautiful November Sunday in Staffordshire for The Roaches Fell Race, 15 miles and 3700 feet of ascent to follow for 9 hardy Striders who made the trip. Some unfinished final race day business in a couple of the age categories of the Fell Championships with valuable final race points to be scored and final positions still to be decided. I’m confident I speak for the majority when I say we were unaware how tough a race was about to unfold on us.
A two minutes silence observed on Remembrance Sunday at the starting line before the call to “go”. After making our start along some quiet country roads through the village of Meerbrook, competitors turned off into the surrounding fields and from “Frith Bottom” upwards began our ascent onto The Roaches Ridge and with “Hen Cloud” an outcrop of gritstone, overlooking us to the right. Here begins the mud, ankle deep in places as runners scatter out amongst the fields and into the ascent.
As we begin the early stages of the course The Roaches Ridge presents some challenging underfoot activity as we steadily climb towards the trig point at 1656 feet. The views to our left present some stunning Staffordshire scenery in this South West corner of The Peak District which in my book is well worth a return visit for perhaps a more relaxing afternoon stroll next time. We ascend gradually towards Bearstone and Roach End now about 2.5 miles in. Runners then approach Gradbach Forest,  a very tricky and steep descent where concentration and caution was required due to slippery and muddy conditions underfoot, tree roots twisting in all directions as we head down towards the river crossing. I personally found this section of the course very challenging.
A reasonable flow rate to the river water requires caution as runners steady themselves and gauge their footing during the river crossing at approximately the quarter mark of the race. From this point the race becomes a little kinder to competitors underfoot, allowing you to stretch the legs  out  and actually “run” despite still ascending for parts and taking on yet more muddy conditions, the trickery is momentarily behind us as we skirt Helmesley Rocks.
Throughout the course I felt “looked after”. Marshals were dotted at various points of the course, calling encouragement. Several Radio Amateur volunteers were also present at road crossings in case of that unwanted injury or call for need, credit has to go to Mow Cop Runners for the organisational aspect of this race.
At approximately 5 miles, farmers tracks present cattle grids and those cunning tubular metal gates, which when your tired, wet, muddy and male, present a particular issue in accurately and modestly getting yourself over, avoiding major pain and embarrassment.
Approach Wildboarclough, civilisation begins to reappear ahead, as does the first placed runner approaching towards me in the opposite direction, I glance at my Garmin and make a mental note that I’m only about 3/4 miles from the half way point, so that means this lad is 1.5 miles ahead of me then and heading homewards, that’s because folks this course is an out and back and everything that I’ve described so far is about to be re run in reverse. A brief run on some “concrete” as we approach the steep climb of Shutlingsloe, now in the County of Cheshire and a killer climb to the windy trig point at 1660 feet. As runners are checked off at the half way point by the marshals, I can’t help but rest momentarily and  take in the views to the West on a gorgeous sunny day, what seems like the whole of Cheshire in the distance and the Jodrell Bank telescope pointing towards the heavens, the climb up Shutlingsloe was worth it for the view alone.
Without the detail in reverse, this course steadily ground you down through the second half of the race, yes the sun continued to shine but now it was in your eyes as we headed back to Meerbrook, picking up those tired legs and counting down the miles and still finding the time to go 4 foot deep into an inconspicuous bog at 10 miles.
The cow fields on the return during the last mile were now well and truly carved to bits and extremely smelly, the mud sucked you in again but the finish line was in sight. One to be proud of for all finishers. Cake in the Village Hall has never tasted so good. I ached until the following Thursday.
The winner, Sebastian Batchelor (unattached) in 2 hours 4 minues 36 seconds, an incredible time and to average just over 8 minute miles on that course is nothing short of amazing.
Applause to our very own Caroline Brock, 1st Lady  and 1st Strider overall in 2 hours 45 minutes 1 second and placed 45th in a field of 211 finishers, what a Fell Championships it’s been for Caroline.
We now await confirmation of the final placings for the 2017 Steel City Striders Fell Championships.
Anyone who fancies a challenge and undertaking a proper fell race, then enter The Roaches in 2018…

In agreement with Russell’s report, Joe Buckman commented via facebook that  “It was collectively agreed by the Striders there that this was the toughest races we have ever done.I’m pretty sure I was close to tears at one point, Michael was nearly ill, Lucy’s feet nearly fell off from cold, among other things.”
Strider’s results:

Joe and Rob reportedly crossed the line hand in hand. Looks like Caroline and Alasdair finished almost together too.

Note: Nick Burns is conspicuous by his absence in these results despite him being the one to include the race in the Striders’ Fell Race Championship, a fact that did not go unnoticed! 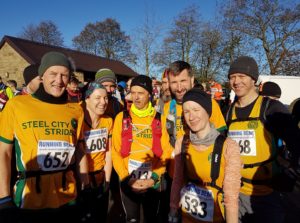 “The Nick Burns Lynch Mob.” This must be a before photo, judging from the smiles. Photo, Rob (photogenic) Davies – aka Rom Davids in the official results. 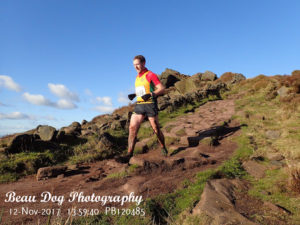