This indoor athletics event was down at the English Institute of Sport as part one of a three part Run, Jump, Throw series organised by City of Sheffield & Dearne Athletics.

Parts two and three at the same venue are Wednesday 24th January and Tuesday 6th February and both can be entered via the Race Results website.

For those interested in further local track meeting in the coming months there is also the Sheffield Festival of Athletics at EIS on Sunday 28th January and a bit further afield, 6 indoor track meetings on Sundays at Sport City Manchester throughout the winter.

Back to last Wednesday: The weather was foul outside with ice, sleet and driving winds.  But the beauty of an indoor meet is just that, its indoor.  Perfect on a night where the weather outside is foul.

Add to the positives that it was as cheap as chips to enter too, just £6 for your first event and then £2.50 for each subsequent event.  Plus all the races were electronically timed.

Events on offer covered a wide variety of track and field from 60m to 3000m on the track, to shot put and pole vault in field.  And this was an open age event, so right from U11, up to seniors and in some of our cases, beyond senior.

But despite the above combination being seemingly a no brainer to come down and compete, only 3 Striders made the trip; Ben Jones, Mick Wall and Ari Hodgson.

First up I continued with my attempt at reinventing myself as sprinter, this time with a debut in the 60m dash.

The heats were grouped by PB, so not having ever ran the distance before I was in the third and final heat.  I asked some young lad how old he was, he said 14 and that he was worried about running against some 20 year olds.  I told him not to worry as I was 45 and was also worried about the 20 year olds too.

Think I got out the blocks ok and felt good. The whole thing was over in a flash and being in lane one I looked over to my right to see only a couple of people in front of me.

So pretty happy with third place on debut, clocking just under 8 seconds which is the 15th best V45 time in 2017.  Although i’m not deluding myself here as I know 60m is a niche event for us older folk.  To highlight this, there are only 50 runs listed on Power of 10 in my age group.

But dare I say it, because there was no previous time recorded, a club record?  I’ve got Louis Wood on the case searching back through archives.

Onto the longest event of the night, the 3000m which saw Ben Jones compete in a field that had a familiar and local feel to it. 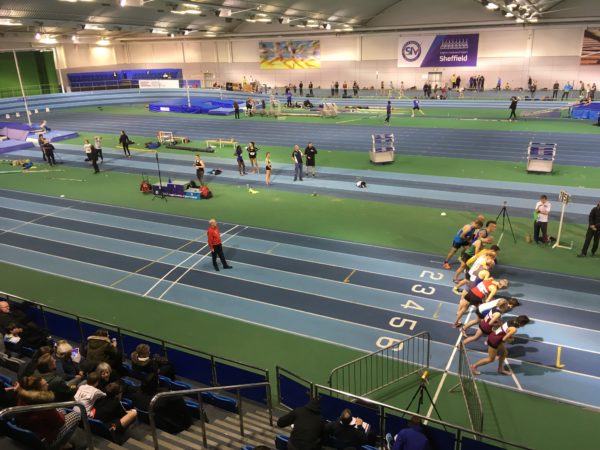 Ben took to the front from the first corner and never looked back. He looked strong from traps to tape and took the win in a PB over the distance.  Congratulations to Ben.

It was felt really great calling home a Strider with gusto in front of a good crowd.

Next Strider up, Ari Hodgson in the 800m.

The race turned out to be a hot one and Ari found that out in the latter stages to his cost.  He admitted afterwards that it wasn’t his best performance.  But to the be fair to the crowd he was clapped home and the rest of the runners waited at the finish before handshakes all around.

Ari was well up for trying his hand at anything and had a go at Shot Put.  Admitting that he’d not done this since school.

His comment afterwards was that he can’t remember the put weighing as much as is did.  At least he had a go, so bravo.

Back to the short stuff for me and one lap of the track in the 200m.

Again, heats graded by PB so I ended up in the final senior heat.  Lane placement is decided by drawing of lots and by nothing more complicated than lollipop sticks with numbers on.  Luck wasn’t on my side as I pulled lolly stick 5 high up on the bank.

It was really a tough start up on the bank, like starting up hill.  Thought I got out ok, but probably took my foot off the gas down the back straight but came strong off the final bend. I was happy with my first 200m in 3 months and even more delighted to find out i’d posted a 0.7 sec PB finishing in 25.4 sec to grab third place in the heat.

As its a new PB for me, it’s also a new 200m veterans club record beating my old mark.

Still a way to go to get close to the overall club record of 24.1

This is still below the ambitions of where I want to be.  I’ve just got to keep on keeping on and see where specific training gets me.

Running is a funny old game Saint, no matter what distance.  Because no matter what your ability, when you put in your best and try your hardest it never feels any different.  But training makes you faster.  So your best, even though it ‘feels’ no different and no easier, it is just faster.

Ben videoed the race and added some subtle commentary.  My form looks horrible in places, it’s all so instinctive, so making changes and remembering everything you’d thought about doing properly is so tough to take into the race with it being so short.  Much to think about and improve upon for next time.

The final event for Striders was the final race of the night, the mile.

Wow, this was a hot race. There was a pacer brought in as they were looking for a tasty winning time.  Ben was looking for a sub 5:00 PB, but with his legs still feeling the effects of the 3000m earlier he couldn’t quite make it stick.

So there we have it, another great event on our doorstep.  I really hope more Striders think about taking part at the other races in the series and other track races.  They are cheap, good fun, protected from the grotty weather and have good crowds.  The people are all really friendly and there is no reason to feel intimidated by anyone.

You never know, you might find something you are actually more suited to than flogging yourself to get better at longer distances.

Full result from the whole meeting available via Power of 10 website.