Run Norwich is an annual 10k road race staged in Norwich city centre, and 2017 was the third time the event has been staged.

Probably not surprisingly given that Norwich is Far Away and not easy to get to, I couldn’t find any other Striders in the results from any of the three races staged so far.  And that’s a shame because it’s a fantastic event for a number of reasons. It is really well organised, and fantastically supported. The 2017 staging was the largest so far with entries capped at 6,000 (2015 and 2016 were capped at just over 3,000 and 4,000 respectively) but the organisation was well up to the task of accommodating all those runners, plus supporters and volunteers in what is a pretty small city centre.  The chip-timing this year had a small number of failures, delaying the release of the results (which is why this report is late), but that’s my only grumble about the organisation.

The route is fantastic as well, which shouldn’t come as a shock given how beautiful Norwich is.  (Is my bias showing yet?)  It’s slightly hillier than you would probably expect given Norfolk’s reputation for being flat, but with gradients being long and gentle rather than short and sharp.  There’s two particular inclines that make themselves felt – one long drag up Rose Lane after about 5km which has a slightly steeper kick at the end, and then another right at the end of the race, up Rampant Horse Street just before turning towards the finish – but nothing that should concern a Sheffield-trained runner.

There’s plenty of sights along the course, which add some colour. The route passes Norwich Castle twice, the Guildhall, historic Tombland, and takes in all three of Norwich’s cathedrals, passing quite near to the Roman Catholic Cathedral, and right through the grounds of both the Anglican Cathedral and the main one, Norwich City FC on Carrow Road.

The goodie-bag for finishers is pretty decent too: a banana, a bottle of water, some snacks, a can of Adnams’ Ghost Ship, and a freebie from the Norwich City Community Sports Foundation – the football clubs’ charitable organisation – in my case, the strangest race freebie I’ve ever received – a set of Norwich City branded clothes pegs. I think they probably take the opportunity to empty the stock cupboards at the club shop of whatever tat they’ve been unable to sell. Clothes pegs. Anyone beat that? 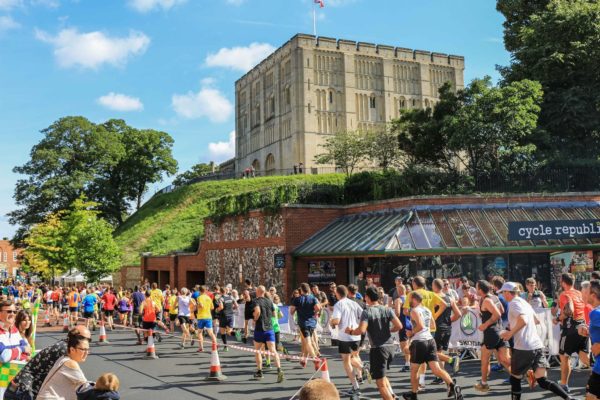 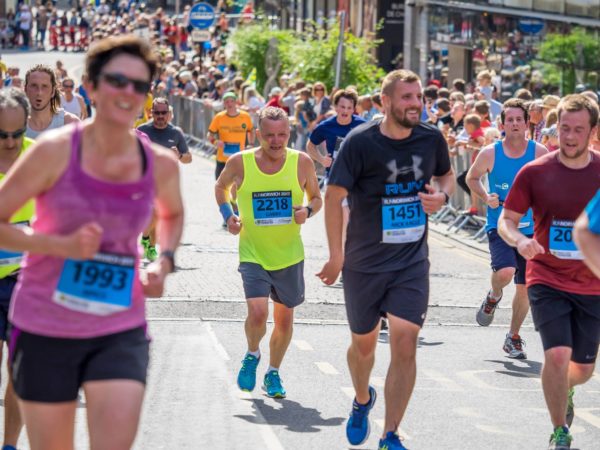 Me, representing Team SCS, blurry in the background. 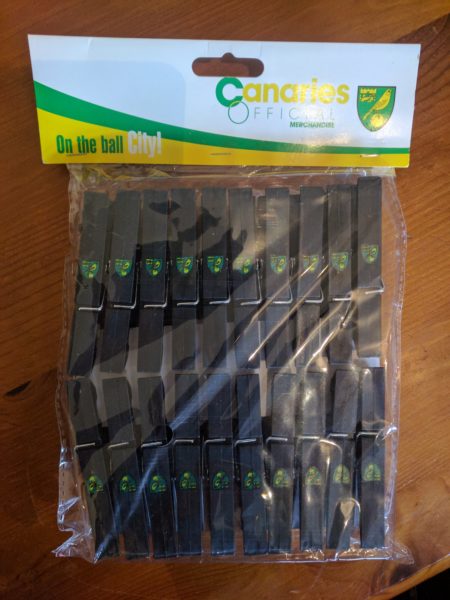