One of the first things I ever remember Andy Buck saying to me was, ‘do you want to come on a mountain marathon, 2 days of carrying everything you need over 30 miles of hostile terrain’. Erm…. no thanks. Yet here I am embarking on my second one. I think I must be easily led.

The weekend started with Trevor Burton picking Simon Bayliss and myself up and driving to Penrith train station to pick up Ian Stinson. Seemed weird not visiting my Dad, (Syd) en route as he lives 500 metres away from the station but hey, we had a tent to erect and a feast of veggie chilli to eat. The baiting from Howson had already started on Facebook as he and James Fletcher decided that sharing bodily warmth in a B&B was preferable to a tent. Maybe so, but we win on the value for money stakes and the field was quite comfy actually.

Day One was a staggered start and Simon and I had a 9.28 start which meant starting at 8.30 and walking 3 miles to the start line. We were handed the route map  with all the controls on for all the different classes and a list of our controls for the Kirkfell class.The first thing to do was identify which controls were ours and then make a start. Simon and I conferred and checked we had both identified the same checkpoints which thankfully we had. The first part was very runnable along the lake and at this point the sun came out. First error – no sun cream. This is the Lakes, it always rains. Good job we both packed our multi functional Striders buffs (plenty left by the way, £5 each from me). The first climb led us passed a sheep that had decided to lie down, die and dissolve on the path – the stench!!, however, no time to dwell on that disgusting sight, we had Howson to keep ahead of.

Checkpoints came and checkpoints went. Navigation went well except for one slight hiccup which meant scrambling down some rather large crags. We seemed to be doing well and we had caught up to and passed both Ian & Trevor and Andy & Louis. Phil and James had set off after us and there was no sign of them. The next obstacle was a huge climb, and I mean huge. It went straight up. Just looking at the contours on the map gave me the heebie jeebies. Louis wasn’t far behind me on the climb and later told me how he was catching me and laughing at my struggles as I ascended the hill. Simon had shot off at this point and I found him a few minutes later lolling by the control as if nothing had happened – I was dead on my feet.

Now we came to big decision time – do we head down to Buttermere and run along the lake or run over 3 peaks, those being High Crag, High Stile and Red Pike. Errr, hello! Is this really a decision to be made, After that climb, I need to do down hill not up some more! Going down to Buttermere was the correct decision as we would later (actually, quite a few hours later) find out.

From here on in it was pretty steady away. The only thing that changed was the weather. Told you it always rained in the Lakes and so it proved. The heavens opened, the clag came down but we were almost at the end of day one when the weather properly drew in.

The finish line was crossed but Simon seemed keen to run on. I did then ask politely, ‘can we walk now?’. Down to the camp site, pick up the overpriced and poor  choice of beer (Fosters/Guiness/Tetley) but how nice did they taste!. Tent up and we hunkered down to wait out the rain. After a few hours, we were in need of water so a trip to the tap at the entrance to the campsite saw two very wet and bedraggled looking Striders come into the field. Yes, Phil and James, obviously suffering from their cosy night’s sleep the night before rocked in about 3 hours after the rest of us having taken the decision to go over the 3 peaks instead of down to Buttermere – bad idea!

The rain stopped about 8ish but then the midges came out. Simon learned that he can’t eat with a mosquito net over his head, no matter how many times he tries it. The evening passed pleasantly enough. Simon’s tent was larger than Andy’s extremely small one but we know how much Andy values carrying the lightest of loads, so much so, he proudly bought and modelled some see through waterproofs to us all the night before. Cost a few bob but weigh virtually nothing, for good reason too.

Major talking point was that we were camped at the foot of Mellbreak and we all knew what was to come this morning and lo and behold, when the controls were issued at 6.30am, the first one was, as we thought, at the very top of it! That climb certainly woke us all up. The navigation was pretty straight forward today and it was a more runnable day. (after Mellbreak).

The route planners however are a sadistic lot and put a real sting in the tail at the end. Just as we could see the finish line, they decided to send us up a steep, muddy,  forest hill, over the top of it and down the other side into the finish line.

The spirit and support between the Striders teams was excellent. I laughed a lot. If you like outdoor adventures, endurance events, want to challenge yourself a bit, you should really consider giving one of these mountain marathon events a go. I’d like to say thanks to Simon Bayliss who, without really knowing it, pushed me really hard as I had to keep up with him! Big thanks to the rest of the Striders too as we all had a great time. (well I did. I hope they did too!!) 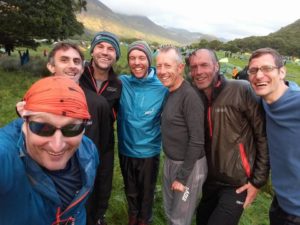