I enjoy reading race reports so I thought I would have a go. 14 weeks ago I gave the family a choice of a weekend in Stratford upon Avon or Liverpool. There was a unanimous decision and on 29th January I booked up to the Shakespeare Marathon. The race is a two lap course starting and finishing in the scenic town of Stratford upon Avon. The course is described as undulating on the RunBritain website with a half and full marathon in the same race. Coloured numbers differentiate between the two races but you can swap; you just need to let a marshal know at the split point.

Pre-marathon training went relatively smoothly. I hadn’t quite banked enough miles and was a bit heavier than running the Grindleford Gallop in March (3.05 hrs). That said, I was injury free and felt fresh.

There were only water stations on the course, so no sports drinks or gels. Even though I don’t get on with gels and hadn’t trained with them, I decided to carry three. I only planned to use the gels if I was a: desperate or b: just outside 3.15 pace but still in with a chance of beating it.

My wife Jayne, daughter Annabelle and I travelled down to Stratford upon Avon by train on Friday afternoon and met with my parents. We all stayed in the Premier Inn Waterways. There are two Premier Inns in Stratford but I would definitely recommend this one. It’s clean, has friendly staff and is situated by a canal and only £49 a night for a family room.

On Saturday morning, I was tempted to do the local Parkrun but opted to rest and sight see, take a riverboat cruise, etc. I left the others in the afternoon and got some rest while they continued to look around.

Having read Nick Burns’ race report about Edinburgh last year and the restaurants being busy, we decided to play it safe and book a table at Prezzo to stock up on some carbs. There are plenty of local, independent restaurants that looked great, but you definitely need to book.

The weather forecast had been ideal; cloud, light wind and a temperature of 10 degrees up to midday, then sunshine in the afternoon. I had mixed emotions when I woke at 7am and saw it was bright sunshine. Annabelle and I went downstairs for breakfast. There were plenty of other runners already tucking into porridge, bananas and flapjack.

The race start is just a 10 minute walk away in the town centre, so you can leave it late to go to the start; but as I was race ready with Vaseline, sun cream and plasters applied, I set off from the hotel at 8.20am for the 9am start.

When chatting to other runners on the way to the start, the consensus was that 3.15 would get you a top 50 place, so I started towards the front. There is a good mix between club and non club runners, with only a few brave runners in fancy dress.

A klaxon started the race on time and I made it over the start line in about 5 seconds.

The first mile is on closed roads around Stratford upon Avon. Two of my three gels dropped out of the gel holders in my shorts in that first mile. Note to self; don’t try something new on race day! I knew I was running way too quickly and needed to settle down. I wasn’t concerned about losing the gels though.

The race then goes out into the country side and surrounding villages. The next miles seemed to fly by.

Then comes what other runners described as a ‘steep hill’. It’s just over a mile long and with a short 200 meter kick up towards the end. Fellow Striders would call it a slope not a hill and I liken it to Ecclesall Road from Waitrose to Napoleons Casino.

On the other side, there is a 200 meters descent and then back onto the flat. I felt I was running with ease and the next few miles passed me by as I started daydreaming. I can’t recall much about these miles until I came out of my daydream when the ‘half marathoners’ turned off and I realised I needed to find an appropriate place for a comfort break. I thought about doing a Paula but just couldn’t bring myself to try.

I saw my family and Annabelle handed me half a bottle of Lucozade Sport. I know I can have a few mouthfuls without causing stomach cramps. I passed halfway feeling good in 1.35.21.

By now, there were only a handful of runners in sight and I passed a few who were slowing. It was starting to warm up but the next few miles ticked by with no issues; there are some beautiful views and houses to keep your mind occupied and I found myself day dreaming again. I have a bad habit of doing that in training and races and it can play havoc with pacing but thankfully not today. I even day dreamed up the ‘hill’ on the second lap.

As I started the 200m short descent for the second time, it caused some discomfort to my quads and I realised there was plenty of time for the race to go pear shaped. I managed to keep to a comfortable pace until just before mile 21, when you turn onto The Greenway, which is the extra section on the second lap to make up the distance. It is a straight, flat single track rather than a road and although some of it is lined by trees, there are significant spells where the trees were a bit too far back to provide shelter from the sun. Fellow Strider, Mike Smith, had warned me it was long and soul destroying and he was right. By now it felt like it was 30 degrees; in reality it was 17 but I was working hard. I toyed with taking a gel but thought it wasn’t worth the risk of causing stomach cramps. There was a slight head wind and a couple of water stations to provide light relief (the water stations are every two or so miles throughout the race).

The Greenway finished with about a mile to go and then it was back onto the road for a short spell, before a couple of twists and turns take you into the park for the finish.

After feeling rough between miles 22 and 24, I felt good again but knew I had no chance of breaking 3 hrs 10; so I enjoyed the run into the finish.

1,909 runners completed the half marathon.

From a spectator’s point of view, Stratford upon Avon is a lovely, historic town with lots to do (both free of charge and at a cost). It is easy to fit in a couple of viewing points as there are a number of opportunities to see the route within walking distance of each other. My family managed to see me at about 0.5 miles and then about 12.5 miles, before going to the finish line; but if you have your car with you, you could also fit in one more spot towards the end.

The spectators found it very busy at the finish at first but by the time the 2h 50 mark had passed, most of the half marathon supporters had moved on and it was easy for my family to get a good position to see me come in.

You finish in a field at the side of the River Avon, opposite Holy Trinity Church, the final resting place of William Shakespeare. It is a family friendly area with refreshments provided by the local Rotary Club and massage is available for a donation.

Thankfully, my parents were staying on Sunday night as well, so I could use their hotel room to shower and freshen up. I chatted to the race winner, Noel Kindon, who was also staying at the hotel. His race didn’t go to plan; he won in 2:46:56 (chip time) but picked up an injury around mile 16 and struggled through the last 4 miles run / walking.

After refuelling with ice cream and coffee on the riverside and grabbing a late lunch in a restaurant near Shakespeare’s birthplace, we got the train home. The train from Stratford takes around 55 minutes into Birmingham Moor Street station. From there it is a short walk to New Street station. The train from Birmingham New Street was packed and, due to a derailment earlier in the day, all of the seat reservations were invalid. The Train Manager, on hearing that I had just run a marathon sent us up to First Class where we had a comfortable trip home. According to Annabelle, it was one of the best bits of the weekend!

In summary; it’s a mainly flat race with a few mild undulations and a slope that’s only of note in the second half of the race. The scenery is great and although the support in the rural sections is sparse; they are genuinely supportive. It’s well organised, well marshalled and the water stations do their job (although sports drinks later on in the race would have been good). Even though I managed a 16 minutes PB, I don’t think it’s a PB course but it’s not slow either and all in all makes for a great weekend break. 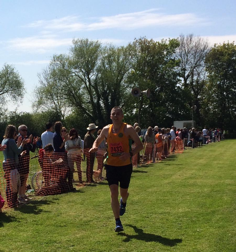 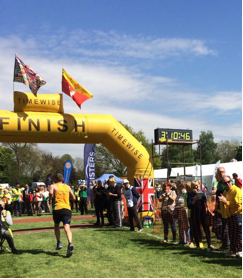