This was the final event in a series of three open meetings organised by Sheffield Athletics Group, an association of clubs and other interested parties (SIV, Universities, Schools) which together with English Athletics and the local authority is charged with raising the profile and standard of athletics within the City.  The stress is on the word athletics, not just Track and Field although there is a belief that as a body SHAG should concentrate on areas of weakness..

These events are so enjoyable, especially on a warm summer’s evening such as this; perfect conditions for racing. There’s a buzz with knowledgeable spectators, field events to follow and track races coming one after the other in quick succession. Including a British Milers Club 800m there was electronic timing and a wind gauge for the short sprints and jumps. These events are organised to a professional standard in order to keep control and stay on time.

There was drama preceding the 3000m as it was made clear that U15 athletes are not allowed to compete with seniors and the two young lads present would have to run in a separate race. This seemed harsh considering the nature and standard of the event but there are good reasons why children are not permitted to compete with adults. The start of the 800m for example can be bruising affairs whilst rules governing frequency and distances children may compete (Rule 141 S2) try to protect youngsters from being driven too hard, too early, with pushy parents and unscrupulous team managers often the culprits. There’s a motto that “all children should be sprinters” or at least start life as such, something that some adults might bear in mind when considering what their best events really are.

Back to the 3000m, won by Sam Roberts (City of Sheffield, U17) in 9:09.9, our own marathon star Mark Gray ran 10:06.63 whilst Peter Brown, demonstrating why he hasn’t raced on the track for over ten years, came a solid last with 11:47.8. With small fields in track events there’s no hiding place and the sympathetic applause can be deafening. In his post race interview Mark revealed that this was his first track meeting and a great experience being one of the shortest and most painful races that he has ever completed. With lessons of pace judgement learned (first km 13 seconds faster than the next two) he’s looking forward to having another go soon: pain is only temporary as they say.

So, is track and field for you? These events have a great atmosphere and are great fun, whilst you may find out that you have talents that you never even knew existed. Oh, and we’ll give you your lungs back later. 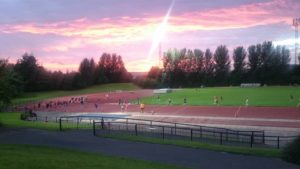 Sunset over Attercliffe courtesy of City of Sheffield and Dearne AC