Whilst AWOL from the Exterminator and Great Longstone, I did run Shelf Moor on Sunday. A little report: Shelf Moor is the high moor north west of the Snake Pass and south west from Bleaklow. The fell race is a gem – a fast start, a very steep ascent to Higher Shelf Stones trig point, a traverse of the moor, a steep, fast descent and a final 1km flat sprint to the finish. All for £4 – highly recommended.

The six mile route taken by the Shelf Moor race has three of the area’s aircraft wrecks within close proximity. One is at the top of the steep climb called James’s Thorn, the remains of which nestle in the peat on the 1800 foot contour. Another lies below in Ashton Clough while the B-29, “Overexposed” rests at 2038 feet, virtually the top of the Peak District. The views from the trig point there on a clear day are quite extensive.

Markers are followed Northwards across Shelf Moor to the north the far side of Dowstone Clough. After the stream crossing, runners hurtle down the soft peaty terrain, and from Lightside emerge at the track that leads to the finish near the bus turning circle at the end of Shepley Street in Old Glossop.

The course record was set by three times British Fell Running Champion Colin Donnelly in 1989 and is 39 minutes 45seconds. An excellent time for many on the flat, never mind adding the 1500 feet of ascent (and descent). Carol Greenwood of Holmfirth has the ladies record at 47 minutes 17 seconds from 1986.

The race was first held in 1984 and, apart from 1995 when dry weather closed all the access land, has been held ever since. The race went ahead in the 2001 season after the foot and mouth epidemic had been resolved.

This year the race was won by Stuart Bond of DPFR in 44.20. The first woman home was Caitlin Rice of Ribble Valley in 51.22. Well done to Andy, sole Strider representative 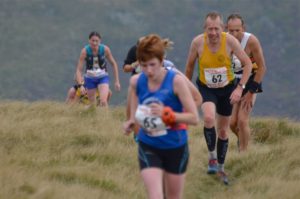