Sunday saw the first running of the Silverdale Stampede, a 10k (ish) race from the grounds of Silverdale School in leafy south west Sheffield, taking in trails around Whirlow Hall Farm and the beautiful Limb Valley.

The race came little more than a week after the Tiger’s Todger, a fell race organised by Totley AC, which followed a very similar route. But that’s about where the likeness ends. Whereas the Tiger’s Todger is an official fell race, attracting a fast field of runners and with FRA rules such as kit checks to take into account, the Silverdale Stampede was a far more laid-back affair.

More than 100 runners lined up on the playing field, with 52 running the 10k (ish) route and another 52 opting for the shorter fun run. The 10k attracted a wide range of entrants, with some familiar faces from Peak fell runs, a large group of Smiley Paces, teachers, Silverdale parents, and a handful of green and gold Striders.

After a slightly confusing start, in which a group of teachers set off first (we were challenged to “chase them”…), and champion fell runner Helen Elmore set off at the back of the pack, we were off, up the steep school field and out on trails heading towards Whirlow Hall Farm.

A steep downhill trail, muddy from the previous night’s heavy rainfall, took us out into the Limb Valley and from there it was the familiar climb up towards Ringinglow. I’d settled into a comfortable position towards the front of the pack and held it as we followed the trail, rising up and up, through thick foliage and then opening out into fields.

At the top of the Limb Valley, whereas the Tigers Todger carries on ascending into Lady Canning’s Plantation, the Stampeders swung left, over stiles and over fields, before beginning a descent back down to follow a parallel trail down the valley.

As I reached Whirlow Hall Farm and my Garmin ticked onto five miles, I wondered how this race could possibly become a full 10k… and it didn’t. As I ran back into the school field, finishing just ahead of Silverdale’s male PE teacher (woohoo!) I realised the course was at least a few hundred metres short. Perhaps next year it could finish with a few laps of the track?

Overall, this is a fun trail race and a fine addition to the spring race calendar in Sheffield. It also seems to have a been a great fundraiser, bringing in £947 for the school. The stewards – a few of whom seemed to be pupils – did a great job, there was water on the course, and the route was relatively easy to follow, with tape markings on most of the junctions.

However, it wasn’t without some very minor teething problems, and there’s a few ways the Stampede could perhaps be improved for next year. It’s not a major issue that the course was short, though next time perhaps it could be described as a “trail race” rather than a 10k. Also, for spectators, there was little to do on the playing field while waiting for the runners to come back in. A cake stall, or a few children’s games, could have made a killing, and provided an extra contribution to school funds. 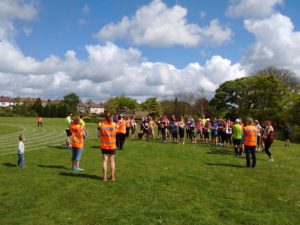