2017 is the first time the Simplyhealth Great Manchester Run has included a Half Marathon. The second half of the race is the same course as the 10k with the start of the race heading out towards the Etihad Stadium, essentially splitting the race into two out and back sections.

As expected with it being a ‘Great’ run, its more expensive than most races with the Half at £44 and the 10k at £38. I’d done the 10k last year so thought i’d have a crack at the longer distance.

The runners split into 2 pens (Under 2 hours and over 2 hours) on Portland Street at 9.00 where we observed an impeccable minutes silence for the victims of the Manchester Bombing the week before, then after the tannoy played the Oasis – Don’t Look Back in Anger we were off.

It was a slow start due to the sheer volume of runners going out of town towards the Mancunian Way in the direction of the Etihad Stadium, for the majority of the first 2 miles, we were all running on a single carriageway and at 3 points we were almost reduced to walking pace. There were far too many runners for the width of the road with no opportunity to overtake.

I’d intended on trying to make a big hole in my HM PB but the start killed it for me. As we ran up Ashton Old Road the pack started to thin out and pace increased along Alan Turing way towards the Etihad Stadium, which was the first turning point. Again we slowed as we had to cross a footbridge from one side of City Campus to the other, then halfway round the ground, turn and back over the same bridge and back the same way towards the City Centre.

From there we picked up the 10k course along Bridgewater Way, down Sir Matt Busby Way past the Old Trafford, round by the Imperial War Museum and back down Bridgewater Way finishing on Deansgate.

Don’t think i’d run this race again, it was a lot of money to spend to run along single lanes of dual carriageways and the support was less than when I did the 10k the year before (although you can’t blame the people of Manchester for being wary of public events given what had happened the week before). Suprisingly, I appeared to be the only Strider there,

Out of the 5775 finishers there was one solitary Strider (me) 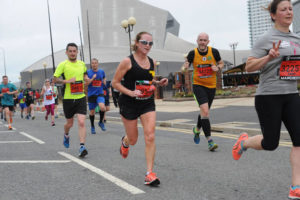