A heroic effort by Steel City Striders providing a 100% green & gold team for Small Park, Big Run in aid of Palestinian welfare organisations. In total, 299 Laps were notched down on the Striders board

The course was a 1k loop from Meersbrook Hall downhill to the Oddfellows fountain, then a right turn past the playground before ascending up the “big hill”. Turning right along the top of the park for glorious views across the city, before descending through shady woodlands back to the start.

Fact number 1: One of the refugee camps providing support to thousands of internally displaced people is the size of Meersbrook Park.

Andy Woffindin led the team out, sparing time from his official duties for some mild banter and a photo opportunity with the Lord Mayor of Sheffield, Councillor Ann Murphy.

There were many notable performances on the day but to avoid reading this report being as much of an endurance event as the run, I’ll just give a few shout outs to:

Richard Pegg – who saw the Monster of Meersbrook in the early hours of Sunday morning, but still kept running. True grit.

Zoe and Leisha who did a 3 hour stint between them and still kept smiling.

Catherine McKeown – who managed to hold a Staffie and an olive branch from Palestine without causing any “diplomatic incidents”.

James Norton – for whom 3 hours and 16 miles of Meersbrook laps seemed like perfect preparation for Snowden.

Sam Needham – who took impromptu running on impulse to a whole new level, turning up, watching for a bit, then running for 3 hours straight.

Non strider of note is known as Jasper (Legend) who heard about the event on Facebook, turned up from Loughborough, ran a 50 lap ultra then got the train back.

Facts about Palestine were around the course, including the conditions and hours workers queue to cross the wall and go to work in Israel and the shrinking and disconnected map that is modern Palestine due to increasing Israeli settlement.

The event ended with a fun run with lots of children doing 1 victory lap before going to the walled garden for cake and bananas.

The event was amazing organised by Jawad and a team of volunteers. There were friendly marshalls, lanterns on trees for the night runners, Ramadan breakfasts and evening meals and a whole host of other activities going on in the park to make this a great family event.

Palestinian flags were carried by runners and an olive branch symbolising peace, making this an event about solidarity with those living in such difficult conditions. However, you didn’t need to have any knowledge or views about Israel/Palestine to join in the event and just enjoy it as a community run. 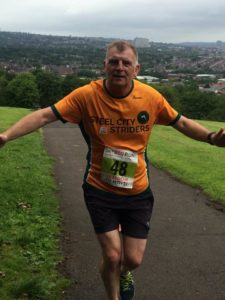