The South Cheshire 20 mile race is hosted by South Cheshire Harriers and is in its 19th Year. It describes itself as 20 miles of frequently hilly, mainly country lanes through Weston, Englesea-brook, Betley, Wrinehill, Shraleybrook, Audley and Barthomley.

The South Cheshire 20 is 5 weeks before the Yorkshire Marathon, making it perfectly timed for training, and as I thought that running 20 miles with water stations and other people sounded preferable to running it on my own, I signed myself up.

The race started (and ended) at Shavington Leisure Centre, where I arrived early on a grey, drizzly September morning, expecting to be the only Strider, however I was very pleased to see that Sian Evans was also in attendance, taking the green and gold army total to 2. The race route was a 4 mile stretch out from the leisure centre, followed by a 12 mile loop, then back to Shavington the same way we left. It was almost all run on open country lanes (including a bridge over the M6), with regular water stations and marshals at all of the junctions. The marshals were all very friendly and encouraging which I found very helpful, as the field was small at just 187 runners, so it became quite spread out as the race went on (or at least it did at my end of the field!).

The race was described as “frequently hilly”, but I’m sure that Striders wouldn’t give it that title… undulating maybe, but it’s no Sheffield half. Overall I found the route enjoyable, and very well marshalled.

At the end a goodie bag awaited with a nice cotton t-shirt, a gingerbread man and some porridge oats, and I finished feeling glad of my choice to sign up to this race for my first experience of running 20 miles. If anyone needs a pre-autumn marathon long training run, this seems like a good option, and I may well do it again next year!

The race was won by Gary Priestley of Salford Harriers in 1.52.17 and the first lady Rachel Wood of Blackburn Harriers finishing in 2.15.16 ahead of our very own Sian Evans in 2nd place. Well done Sian!! 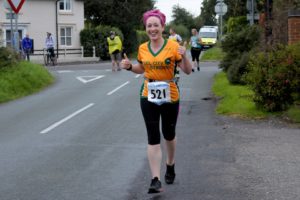