Whilst at the Purbeck Valley Folk Festival over the Bank Holiday weekend, I somehow found myself entering the Studland 5k, an annual trail race put on by Purbeck Runners as part of the Purbeck Trail Series. A broadly circular route, it started at the village park, and ended outside the village hall.

As promised at the comprehensive pre-race briefing, it served up an undulating course over a variety of surfaces. Whilst the profile and some of the trails at the start and end weren’t dissimilar to some you’d find around Sheffield, the sand dunes that formed much of the route were a novel challenge and may have benefited from trail shoes (if anything helps on sand). The ford at the 4km point was an unexpected bonus. The sand and gorse, along with the blazing southern sun, made for an arduous run, but the view over Poole Harbour made it worthwhile as indeed did the atmosphere and great support from the marshals.

The field was about 160 strong, and largely made up of Purbeck Runners, Poole Runners, Poole AC and Lytchett Manor Striders, all of whom were very friendly. The £9 entry price allowed for the mysterious (but very welcome) suspension of parking enforcement, a goody bag at the finish line, and entry into the raffle, for which there were more prizes than runners; there was a mix of technical kit, booze and food prizes, from which I selected some shortbread. There was also an amazing barbecue and selection of cake, which was superb. 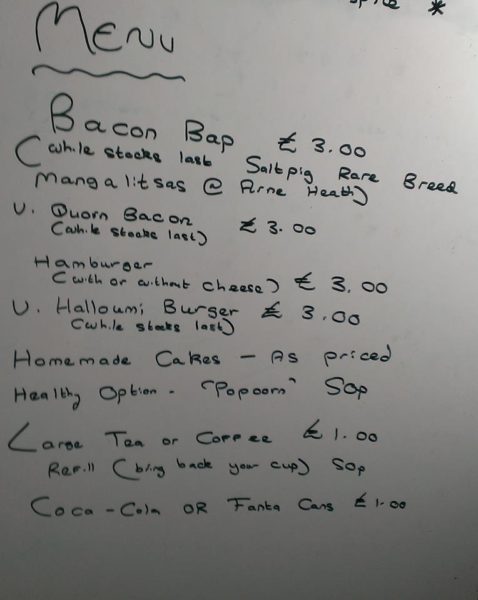 Halloumi Burger for me please.

There was an extensive prize ceremony at the end, with the first male finisher Dominic Willmore of Poole Runners in a time of 18:03. The first female finisher was Clare Martin of Purbeck Runners in a time of 20:59. I was the sole SCS finisher, placed 63rd in a time of 26:24. Not my fastest trail 5K, but happy enough. All-in-all a fantastic race, and well worth spending 13 hours on the road and a weekend in a caravan to be the first Strider home. I’d certainly recommend it to anyone who finds themselves on holiday down there next year.